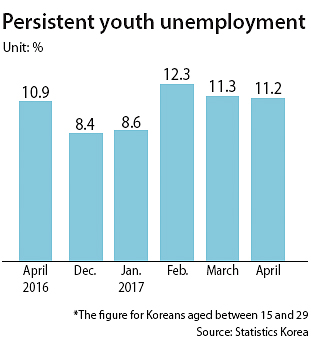 Recent government data backs the notion that the new Moon Jae-in administration should focus first on jobs, especially for the young.

During his presidential campaign, President Moon vowed to pass a 10 trillion won ($8.8 billion) supplementary budget to create 810,000 jobs in the public sector. Insiders say they believe Moon’s Democratic Party will announce a bill for such a budget as early as this month.

According to Statistics Korea Thursday, the youth unemployment rate, or jobless Koreans between the ages of 15 and 29, hit 11.2 percent last month, 0.3 percentage points higher than the previous year. The 11.2 percent figure was the highest for April since 1999, when the government started to compile data in its current form.

“The overall number of employees continue to grow in the country but there also are areas of weakness since the unemployment rate for youth and the self-employed have gone up,” said Kim Ie-han, a director at Statistics Korea. “There also are negative factors that might depress the labor market further such as uncertainties from both at home and abroad and ongoing corporate restructuring in Korea.”

Government data also showed that more taxes were collected this year than last, which helps the argument for a supplementary budget. According to the Finance Ministry Thursday, the government collected 69.9 trillion won in taxes during the first three months of the year, which is 9 percent, or 5.9 trillion won, higher than the 64 trillion won collected in the same period last year. The government cited a rise in corporate taxes as companies’ performances improved.

Last year, former President Park Geun-hye’s administration was able to execute a supplementary budget over worries of a sharp fall in the number of employees in the country due to the corporate restructuring. But now there are signs of economic recovery including improved exports, which could undercut Moon’s argument.

Opposition parties are not welcoming the idea of a supplementary budget. Former presidential candidate Hong Joon-pyo from the Liberty Korea Party said Moon’s plan will make “Korea become like Greece.” Currently, there are 300 lawmakers in the National Assembly and the ruling Democratic Party only has 120. The bill needs a majority to pass.

“We finalized the plan in July for the supplementary budget executed last year and we don’t think it will be a problem,” said an official at the Finance Ministry. “But I believe there is a tough road ahead for the bill in the National Assembly. It appears this issue will be the first political battle.”