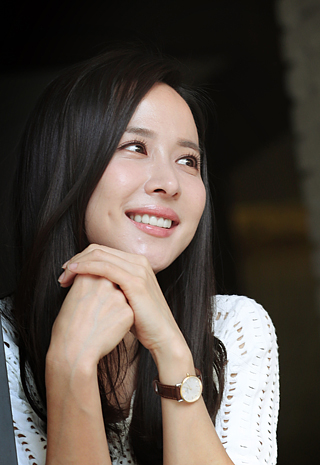 In the recently concluded KBS drama “Ms. Perfect,” Cho Yeo-jeong played a psychotic and possessive femme fatale. Her convincing performance made critics take a second look at the 36-year-old actress who was previously known more as a pretty face and bubbly personality. [PARK SE-WAN]

In the recently-concluded KBS drama “Ms. Perfect,” Cho Yeo-jeong played a psychotic and possessive woman who would go as far as threatening suicide just to get the man she wants.

Though it was a supporting role - the limelight was on Ko So-young, who was making her return to television after 10 years off the screen - Cho earned accolades for her convincing performance as the show’s femme fatale.

Ilgan Sports, an affiliate of the Korea JoongAng Daily, spoke with Cho after the conclusion of KBS’s nail-biting mystery drama. Asked how she felt about playing a psychotic character, Cho simply laughed. “It’s over. There are certainly no regrets.”

Q. What was the most difficult scene?

A. Actually, every scene was difficult because the character is simply out of her mind. I felt like my brain was having a cramp. There wasn’t a single part of her that I could relate to. Going into the project, I set the keyword [for the character] as “obsession.” But the thing is, I am rarely that obsessed with a person, so for me, it was a challenge.

Many people called your performance convincing.

I hoped that she would look natural. Her words are quite strong, even unrealistic. I also thought that if the evil character had too much weight, viewers would easily get tired of it throughout the drama, so I took out as much weight as I could.

Was there a character you referenced?

No, but I referred to all the bad people I ran into throughout my career (laughs). People who feel like they are being bad have guilt, and in order to hide that, their words and actions become fiercer and more defensive. But those who really believe they are doing the right thing have bright faces and sparkly eyes.

My character was the latter. That’s why she could smile, I think.

Your character was abused as a child. How did you absorb that?

I imagined a lot. Sometimes actors must rely on imagination. I thought maybe through this experience, she didn’t become depressed but rather more brave. I know many parents and children have sour relationships. In their daily lives, they throw words at each other, have resentment in their eyes and try hard to look as if they are not affected at all.

The initial media spotlight was on Ko So-young. How did you feel about that?

It was only natural, as it was her comeback after 10 years. I, too, felt so thrilled to be working with her. She seemed like she was [acting] all throughout. But it was kind of sad how my character was in conflict with her that I never really got to chat and have fun with her.

You debuted in 1999. Do you feel like you’ve been undervalued until “Ms. Perfect”?

Actually, I don’t think my acting in my 20s was as good as the performance of actors in their 20s today. I also debuted as a model. I feel like I was able to portray my character in “Ms. Perfect” because I have reached the age I’m at and naturally have some life experiences and perspectives. It was just a role that fit my age.