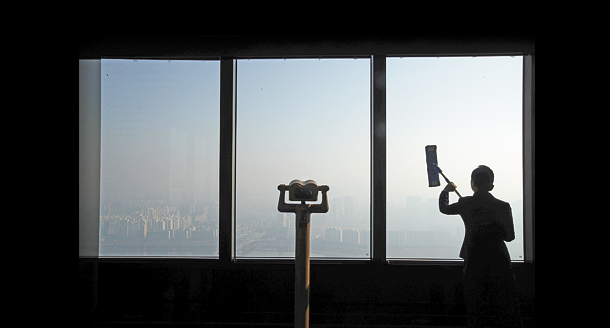 A woman cleans a window at the observatory at 63 Square in Yeouido, western Seoul, on a recent morning. [YONHAP]

T.S. Eliot once wrote that April is the cruelest month. To a lot of Koreans, spring has become a dreadful season due to fine dust, which is smaller than the diameter of human’s hair. On May 11, Korea had two cities -Seoul and Busan - listed among the world’s worst in air quality on a website called Air Visual, which provides real-time updates on air pollution levels of major cities around the world.

With growing concern over the worsening air quality due mainly to yellow dust and industrial dust from China and Mongolia, sales of masks, air purifiers and certain plants have skyrocketed.

Under a dusty sky made up of lethal chemicals such as secondary nitrate, gasoline dust and diesel, people are finding ways to combat the everyday reality by themselves.

From left: Spring field day, one of highlights of school life in Korea, is now taking place indoors as fine dust levels tend to be at their the worst during the spring; People flock to buy Tillandsia, a type of plant known to help clean the air; Protests demanding the government to take concrete and viable action are taking place more frequently. People also mistrust the government data, resulting in many turning to foreign services that forecast dust levels. [YONHAP]

For reference, a human hair is about 50 to 100 micrometers in diameter. While some are doubtful that the dust is lethal, the World Health Organization in 2013 identified ultra-fine dust as a first-degree carcinogen - as the invisible, inhalable nanoparticles penetrate deep into the respiratory system and can trigger illnesses, like cancer.

Based on the air quality that day, Sung prepares masks for her children and also makes adjustments to her daily plans if needed. If the air quality is supposed to be bad, she cancels errands that aren’t urgent, like going to the bank or the dry cleaner’s.

“If the weather is good, I make it a priority that my children go out and play,” she told Korea JoongAng Daily. “[The ability to] open the windows to ventilate [the house] and allowing kids to play outside - these are basic needs. It’s terrible how we aren’t guaranteed these any more.” 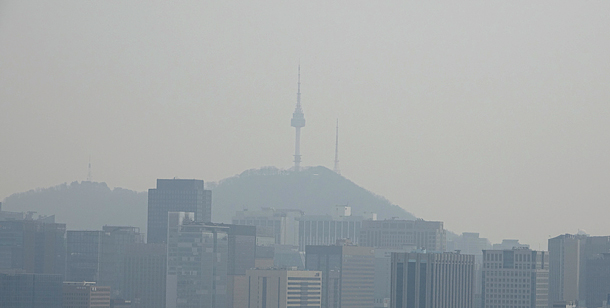 She is even deliberating moving outside the country. “I remember vividly this season last year and the year prior. It’s clear that the conditions are worsening. It’s hopeless.”

For now, she’s made bulk purchases of masks as well as an air purifier and a laundry dryer.

It’s true that many children have been stripped of their rights to play outdoors, particularly in spring and fall.

More schools are holding their spring field days indoors or cancelling them due to heavy air pollution. Spring field days, held outdoors, in Korea have traditionally been one of highlights of the Korean school year.

Having to live with fine dust has certainly changed the lifestyles, goals and consumption patterns of Koreans.

“I purchase masks in bulk as they have become a daily necessity like toilet paper. I couldn’t even leave the house last month as the fine dust concentration levels were high,” said an office worker surnamed Yang, who purchased 200 masks.

Surnamed Hwang, another office worker, said he placed five pots of a plant called Tillandsia, which is also commonly referred to as Airplants, which helps to purify air. Tillandsias require low maintenance as it lives by absorbing water and nutrients through its leaves, rather than from soil. The plant, which has thin beard-looking leaves, absorbs particles in dust and moisture in the air. Hwang said he learned how to cultivate the plant when he heard that as long as the plant is cleaned once a week, it is effective in refining the air.

According to e-commerce site Ticket Monster, sales of masks in March doubled compared to March of last year. Functional masks that block yellow dust were one of the best-sellers. 11st, one of Korea’s leading online shopping mall website, said sales of air purifying plants like Tillandsia from January to March have increased 29 percent compared to last year.

Although the effects of the plants have not been verified, the anxiety people have over dust has created a frenzy. Byun Moo-seok, a professor in the Department of Landscape Architecture at Chonbuk National University, explained that there are research reports that explain that the total surface area of needle-leaf plants are wider than broadleaf plants, proves to be effective in refining air. However, there is no specific data on how much a plant in a closed environment purifies the air. 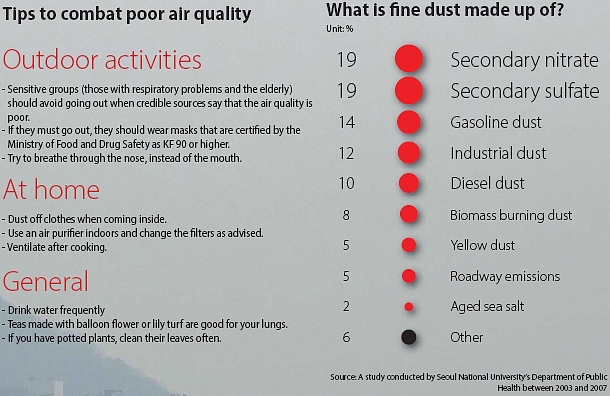 The policies that the government has come up with are still insufficient in getting rid of the anxiety people have. Last June, the fine dust special measures that the government presented were to increase the usage of eco-friendly cars by 2020, and to invest about 200 billion won ($100 million) into scrapping of aged diesel cars.

However, the public didn’t seem to welcome these ideas. Graduate school student Lee Dong-jin said, “Other than the fact that the government is advising the public to refrain from going out, I can’t see how they are helping.”

A woman surnamed Choi, who has a daughter in 1st grade said, “I think there have to be more immediate measures such as closing schools when the fine dust concentration levels are high.

A man surnamed Shin, 27, said he checks air pollution index sites everyday before he goes to work. “I heard that the standard of fine dust concentration levels are more lenient in Korea compared to other countries in the OECD. If a foreign website says the air quality is bad, I wear a mask even if Korean sources say it is fine.”

Some people even measure the quality of air by themselves.

Online shopping website Gmarket has created a new category dedicated to air measuring appliances after the sales of instruments that measure air quality increased 155 percent in one month.

Frustrated with the lack of action by the government, some mothers have formed a civic group to take matters into their hands and make stronger demands of the government and industry.

About 44,000 mothers have joined an online community that quickly developed into a civic group. Since the establishment of the online community named Dust Out last May, the group has held four meetings with the Ministry of Environment to submit policy suggestions on improving air quality. They drafted a 44-page report in February detailing their requests to the central government, which included requiring the use of air purifiers at child care centers and in schools and publishing specific analysis on fine dust and their sources.

Experts advised that realistic measures are necessary. Doctor Choi Yong-seok from the Seoul Metropolitan Government said that “Along with measures like reducing the number of diesel cars, there has to be more immediate measures like providing more masks and increasing the sophistication of air pollution prediction systems.”

“I don’t think the problem can be addressed by blaming China,” said Choi Ye-yong, the director of the Asian Citizen’s Center for Environment and Health, a civic group based in Seoul. “Air pollution from vehicle emissions is one area that needs to be worked on, not just by the Ministry of Environment but by all of the citizens in the country.”