Kakao will add AI to its services

Kakao will add AI to its services 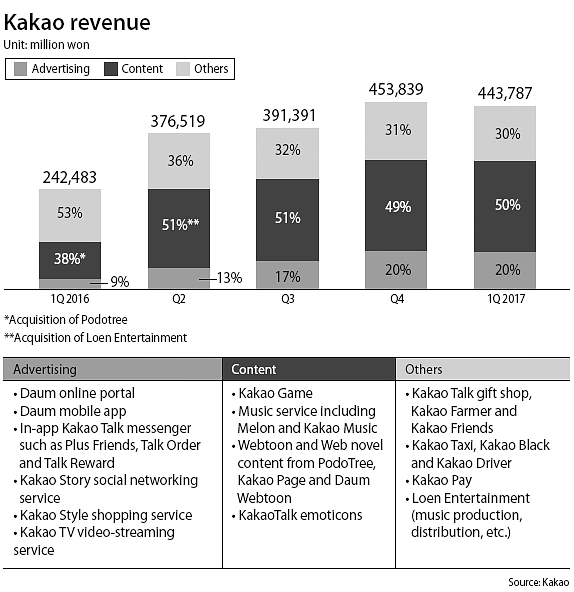 Kakao, operator of the nation’s most popular chat-app Kakao Talk, will bolster its services from its messenger app to taxi-hailing and shopping, by adding artificial intelligence, the company said in a conference call Thursday.

Its popular messenger app Kakao Talk will play a central role in the AI-powered transformation of company’s services, said Rim Ji-hoon, CEO of the app provider.

In July, the company will launch a voice-powered AI app that operates on Kakao Talk and by the latter half of the year it will show off an AI speaker that can compete against many voice assistants released by mobile carriers and tech giants. The voice assistant developing projects will aid Kakao Talk to become a central part of customers’ daily lives, the company said.

“Conversational interface, which is gaining much attention in the industry right now, is the essence of Kakao Talk,” Rim said. “If you think of all our services including our music streaming platform Melon, Daum portal, Kakao Taxi and Kakao Navigations linked together via Kakao Talk, you will see how the app can revolutionize your daily life.”

Sending KakaoTalk messages via voice command, which is still not available or at least not convenient on Apple’s Siri or even Samsung Electronics’ latest Bixby, will be a basic function of the voice-powered AI on Kakao Talk, according to Rim.

Kakao has been bolstering research on AI and established a subsidiary dubbed Kakao Brain dedicated to developing an AI-powered ecosystem in February. While competitor Naver set up a task force dedicated to AI last year, Kakao responded by establishing the independent research body.

The company has also been upgrading KakaoTalk’s functions from mere chatting to ordering fast food through a service called Kakao Talk Order, which launched in March. Its grocery shopping service, called the KakaoTalk Mart, operated in hand with nations discount hypermarket chain E-Mart, was released April. By the first half of this year, the Kakao Talk Store, which will enable app users to shop at small businesses, will be released, according to the company.

The company’s content business alone reported 221.8 billion won in revenue, up 142 percent compared to the previous year. The acquisition of Loen Entertainment, operator of the nation’s largest music streaming platform Melon, contributed to the steep sales growth as earnings from the acquired company were reflected in Kakao’s earnings from the second quarter of last year.

Advertising sales, on the other hand, grew only 3 percent year on year and fell 6 percent compared to the previous quarter, as it is traditionally a low season for advertising, the company explained.

Kakao is planning to launch an ad platform called Kakao Momentum, which will be capable of detailed customization of ads for individual consumers, by the third quarter.