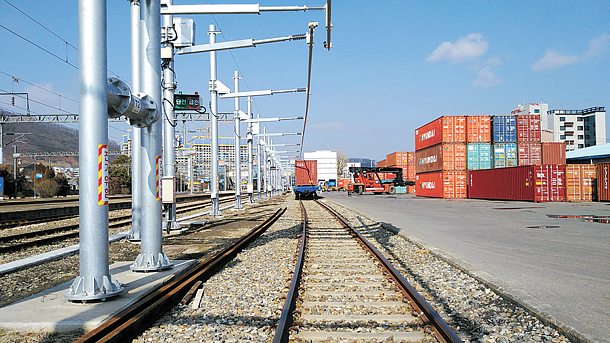 Overhead lines are installed above railway tracks and provide power to electric trains and trams. While the lines are generally not a problem in environments like cities, where trains and trams are used to move people, they can be an obstacle for freight trains carrying heavy cargo. Cranes often have to navigate between the wires to unload and move containers.

The product LS has developed can actually shift position, giving more space for cranes to operate without obstruction. The wire recently went through a test run at Okcheon Station in North Chungcheong. While a similar cable already exists for trams that transport people, this is the first time a movable line has been made for industrial use.

“We’re expecting the new product to contribute to expanding usage of electric trains in logistics,” the company said in a statement.

Electric trains are cheaper than diesel counterparts in terms of maintenance cost and have three times more pulling capacity, according to the company, which means they can move more cargo per trip.

The remaining downside is fixed overhead lines, which LS says can be solved with its movable wire.

The product’s development was part of a plan by the Korean Ministry of Land, Infrastructure and Transport to develop movable overhead wires for electric freight trains at container yards.

“The base material for the wires is aluminum alloy, which ensures steady operation against temperature change, rain and strong wind,” said Kim Dong-wook, chief technology officer at LS Cable & System. “We’re setting our eyes on foreign markets that are actively employing industrial electric trains in Europe and Asia.”