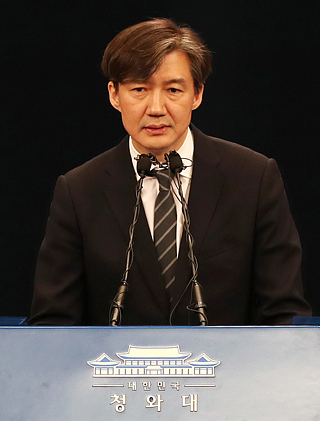 President Moon Jae-in appointed Cho Kuk, a progressive law professor and critic of the criminal justice system, as the new senior secretary for civil affairs on Thursday, demonstrating a determination to make changes to how prosecutors work in Korea.

The senior secretary for civil affairs is a powerful post that supervises prosecutors, police and the National Intelligence Service.

It is usually held by former prosecutors - insiders - and the appointment of Cho reflects Moon’s promise to overhaul the criminal justice system to make it less political.

Reforming the prosecution, one of the most powerful institutions of the country, is an unfinished mission of the presidency of the late Roh Moo-hyun. Moon served as Roh’s senior secretary for civil affairs in 2003 and 2005.

A series of radical attempts, including appointing a woman human rights lawyer as minister of justice, was made in the first months of Roh’s presidency, generating strong resistance from prosecutors. Roh’s conservative successors, however, ended those reforms and generally used the prosecution for their political benefits, as was customary in the past.

Cho made clear Thursday that he was determined to be a new broom, and the reaction was swift.

“Because Cho is not from the prosecution, and because he is a legalist, a man of principle and reformist, he was seen as the best person to firmly support the administration’s strong will to overhaul the prosecution and other powerful institutions,” the Blue House said.

“Prosecutors in Korea have the exclusive rights to indict, investigate and seek warrants,” Cho, a professor of criminal law at Seoul National University, told reporters at the Blue House press center following his appointment. “Those are strong powers. But the people question if the powers have been used strictly and fairly.”

Cho said he wants to complete the prosecutorial reform before the local elections in June next year. “Once the election period begins, no one will have interest in reform,” he said.

Cho said the massive corruption and abuse of power scandal that led to the downfall of Park’s presidency would have not happened if the prosecution used its powers properly. “It is the president’s firm philosophy that such a scandal must never be repeated,” he said. “I will fully support the president’s plan.”

After high-profile former prosecutors working in the Blue House were accused of taking part in the scandal that led to Park’s impeachment and removal, public trust in the prosecution hit bottom. Kim Ki-choon, former presidential chief of staff, was detained for having blacklisted artists critical of the administration. Woo Byung-woo, former senior civil affairs secretary, was accused of having abused his power.

Cho vowed Thursday that he will never influence investigations by or appointments in the prosecution, stressing that it was never supposed to be a part of the job of the senior secretary for civil affairs.

“Because [some of my predecessors] did so, troubles began. The president and the minister of justice have the right to make appointments in the prosecution and the senior secretary for civil affairs only needs to help in the vetting process.”

Cho said prosecutors need to take full responsibility for how they use their investigative powers. “We want to guarantee the independence of the prosecution,” he said. “As Roh once did, this is an expression of the intention that the administration will not use the prosecution as its weapon.”

Cho said a new investigative authority devoted to combating corruption among senior public servants will be created, a promise made by many past leaders - including Park - but never kept. “It won’t kill the prosecution. It will actually save the prosecution,” Cho said.

“The idea began during the Roh presidency, and it is also Moon’s pledge and belief,” Cho said, asking the National Assembly to support the plan.

Later in the day, Prosecutor General Kim sent a message to reporters saying he had tendered his resignation to the new president. Under Kim’s leadership, the prosecution investigated Park and other senior members of her government, and he said the probes were done based on law and principles.