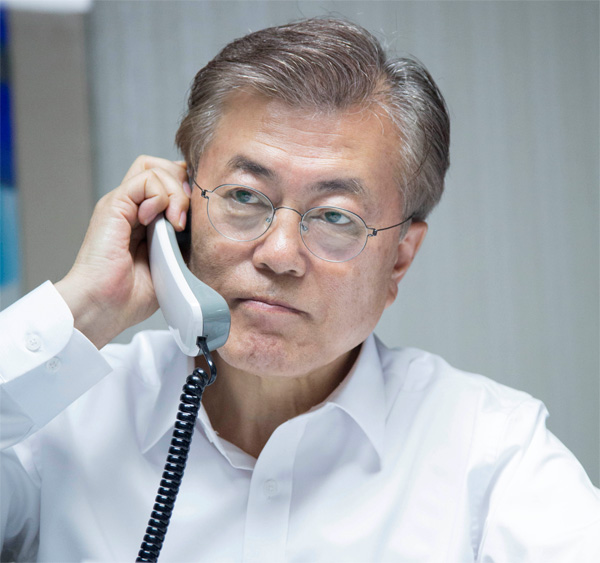 President Moon Jae-in talks with his U.S. counterpart Donald Trump on Wednesday night in his private residence in Hongeun-dong, western Seoul. The telephone conversation lasted half an hour. [YONHAP]

President Moon Jae-in and U.S. counterpart Donald Trump also agreed to hold a meeting as early as possible to discuss North Korea and other pending issues.

The liberal leader won a widely expected victory in Tuesday's election triggered by the March 10 ouster of his scandal-hit predecessor, Park Geun-hye. He was sworn in earlier on Wednesday.

During the 30-minute talks that began at 10:30 p.m. (Korea time), Moon said, "The South Korea-U.S. alliance is more important than at any other time given the growing uncertainties over the security situation of the Korean Peninsula."

Moon also called the Seoul-Washington alliance the "foundation" of South Korea's diplomatic and security policy, while noting that Trump has put the North's provocations and nuclear problem atop his security agenda.

Trump expressed "respect" for South Koreans' choice of Moon as the new president, and said that the North Korean conundrum, though challenging, can be resolved, the presidential office, Cheong Wa Dae, said in a press release.

The U.S. leader, then, said that he would officially invite Moon to Washington.

In response, Moon voiced hopes that he could meet Trump in Washington as soon as possible for "heart-to-heart" talks. He also said he would send a special diplomatic delegation to the U.S. at the "earliest date."

In Washington, the White House said that Trump congratulated Moon on "his great election victory and their peaceful, democratic transition of power."

Their talks came amid growing concerns that tensions could flare in the alliance due to the leaders' differences over a set of security issues such as how to handle a provocative North Korea and the deployment of a U.S. anti-missile system to the peninsula.

Moon seeks dialogue with the North, while Trump's approach to the wayward regime focuses on "maximum pressure and engagement." Moon has also called for a delay in the installation of a Terminal High-Altitude Area Defense battery here, citing the need to forge public consensus. He has demanded the decision should be subject to parliamentary approval.