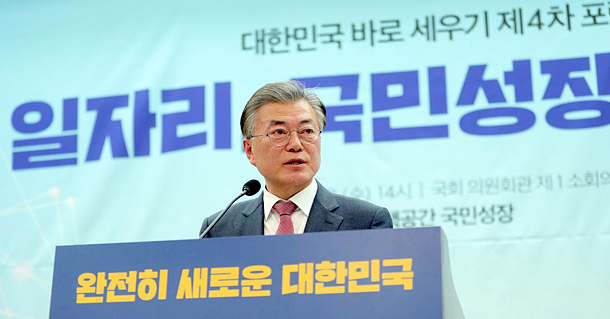 At the end of 2012, right before the Park Geun-hye administration took office, there were 994,291 public servants. Three years later, the number increased by 31,910 to 1,026,201. Public institutions also are expanding their workforce. At the end of last year, the total number of employees at 332 public organizations increased by 4 percent to 299,609.

In January, the Ministry of Government Administration and Home Affairs said that 10,000 public sector jobs will be added such as police officers, coast guards and kindergarten teachers. The workforce has been increasing considerably.

The new Moon Jae-in administration is accelerating the reinforcement, with a pledge to create 810,000 jobs in the public sector, including 174,000 civil servant positions. The 100 Days Plan for Jobs will be launched for swift execution, and 10 trillion won ($8.87 billion) for a supplementary budget is to be raised. As job creation in the private sector is not very active, the government is investing resources to create jobs and lead national growth by expanding income. The plan is a feasible way to overcome the serious youth unemployment problem.

However, public jobs, including civil servants, are not easily eliminated once created. The bureaucratic organization expands unrelated to the workload. Soon, Koreans need to discuss the plan to raise the retirement age from 60 to 65. While the jobs in the public sector will certainly be priming water to lead income-driven growth, it could make the organization too large and add burdens to people.

An economic policy often comes with a price. The new administration needs to keep its promises to the citizens with measures that minimize adverse effects. Also, specifics in funding for public job creation need to be planned, and fiscal deficit ratio, sovereign debts and public pension management must be discussed. A government policy should be more specific and in-depth than campaign promises. Opposition parties’ voices need to be heard, and opinions of officials and private sector also need to be counted.

Furthermore, the new administration will pursue efficiency in the government and public sector. The fourth industrial revolution led by AI, robots and IoT will soon affect the government and the public organizations. Demands for public servants dealing with simple tasks will decrease. Outdated government functions should be drastically reduced.

Without such efforts, it would be a challenge to downsize the public sector in the future. French president-elect Emmanuel Macron pledged to slash 120,000 public sector jobs. France is in a different situation from Korea, but it is a possibility.