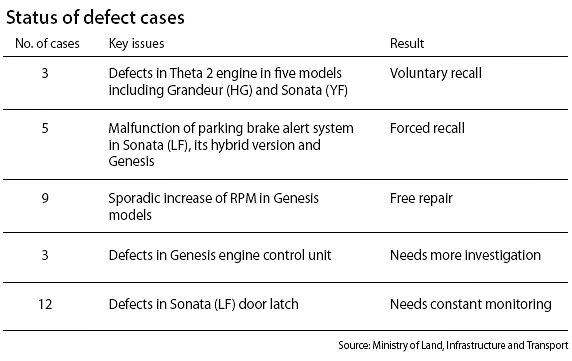 Hyundai Motor and Kia Motors were forced to recall 240,000 vehicles by the transport ministry Friday, which is expected to hurt both their bottom lines and their reputations. This is the first time a carmaker in Korea was forced to recall vehicles after rejecting the ministry’s initial request to conduct a voluntary recall.

The Ministry of Land, Infrastructure and Transport announced Friday that five defects dismissed by Hyundai Motor as being not critical to drivers’ safety were serious and that 240,000 vehicles from 12 models should be recalled

Hyundai Motor’s Avante (MD) was found to have defects in its vacuum pipes that could jeopardize the function of the brake system. Its hatchback model i30 (GD) had the same defect.

The Sonata (LF) and its hybrid version were found to have defects in its parking brake alert system which could lead to drivers leaving the parking brake on. Hyundai’s luxury lineup Genesis had the same problem.

The transport ministry said the carmakers have to submit a recall plan within the next 25 days. They also have to run notices in newspapers about the recall and send letters to owners of the vehicles in the next 30 days.

The ministry requested the Seoul Central District Prosecutor’s Office to investigate whether Hyundai Motor was trying to conceal the defects on purpose.

“There is no concrete evidence that Hyundai Motor tried to conceal the defective parts but there is no evidence they didn’t try to hide them either, which is why we are requesting an investigation,” an official from the ministry said.

If Hyundai Motor was not happy with the ministry’s recall order, it had the option to file for an injunction. But the carmaker decided to accept the order.

“We will do everything we can to adjust the defective parts on their customers’ vehicles,” said a company spokesman.

The five defects are among the 32 exposed in 2016 by a former Hyundai Motor employee who worked in the company’s quality control department. He told the ministry and the media at the time that Hyundai Motor was aware of the defects on cars being sold in Korea but was not doing anything about it.

The transport ministry on Friday announced the progress in all 32 defect cases.

Nine cases that include defects in the Avante’s frontal coil spring and sporadic increases in the Genesis engines’ RPM were subject to free repairs, which Hyundai Motor accepted.

Free repairs are usually ordered for defects that are not critically related to drivers’ safety but are sources of inconvenience. The carmaker can set a time limit for how long it will offer free repairs.

Recalls are ordered for defects that are critically related to drivers’ safety and the carmaker is obliged to offer free repair for an unlimited period. It also has to compensate for any repair charges owners paid before the recalls.

The remaining 12 cases need to be monitored for a while longer, the ministry said.