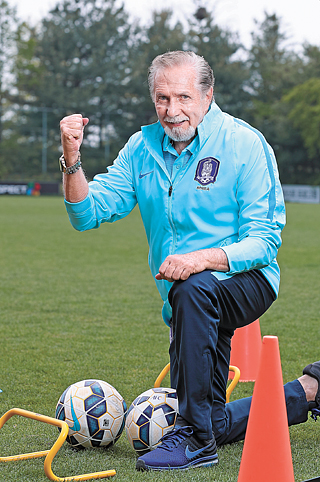 Another milestone in the history of Korean football is approaching: the hosting of the U-20 World Cup, the top youth football competition.

The three-week World Cup begins on May 20 at Jeonju World Cup Stadium in Jeonju, North Jeolla.

With Shin Tae-yong managing, Korea’s team is gearing up to finish near the top - and perhaps echo the triumph in the 2002 Korea-Japan World Cup, when the adult team reached the semi-final. Shin oversaw the Olympic football team last year at the Rio Summer Games.

Backing up Shin is Luis Flavio, a gray-haired Brazilian physical trainer nicknamed “Professor” by the players.

Flavio, a 68-year-old Brazilian who joined the squad in March at the request of Shin, helps the youth team with their physical training. He shatters the stereotype that the older generation isn’t tech-friendly.

On the field, Flavio is usually looking at a tablet computer to go over his training program. “Age isn’t a problem for me,” said Flavio. “It gets demanding at times but I love working with younger people.”

Flavio’s day starts and ends with checking on the players’ physical condition. He says he goes into every training session with the mindset of looking after the young players.

Flavio started his career as a physical trainer, which he studied in college. He’s trained renowned players such as Romario de Souza Faria, better known to the world as Romario.

Working with clubs in his homeland such as Sao Paulo FC, Flavio also has considerable experience working for national teams. From 1981 to 1982, he worked as a physical trainer for the Saudi Arabian national team before coming to East Asia to work with the Japanese team from 1995 to 1998.

Afterwards, he came to Korea and coached various K-League football clubs, including the Jeonnam Dragons in 2004 and FC Seoul in 2005. From 2010 to 2015, he was the physical trainer for the Pohang Steelers when the team was managed by Hwang Sun-hong, the current manager of Seoul. Flavio was part of the Steelers team that won the K-League Classic in 2013 as well as the Korean FA Cup in 2012 and 2013.

Shin and Flavio’s friendship goes back to when Flavio helped Shin as a physical coach of the Olympics team a year ago. “I did not hesitate to accept Shin’s request to join the team,” said Flavio. “I recall Shin pushing for fast and aggressive football during the Olympics and I feel it’s my duty to raise the players’ physical condition as much as possible.”

As he did with the Rio Olympics team, Shin asks the youth team to be fast and mobile on the field. To do so, fitness and stamina are vital. Well aware of this, Flavio has created a customized training program for each player in order to maximize the effectiveness of practices.

Paik Seung-ho, who is with FC Barcelona B, explained how Flavio told him he lacked physical strength and advised weight training to gain muscle. “I’ve gotten a lot stronger,” Paik said.

About Lee Seung-woo, who plays for FC Barcelona Juvenil A, Flavio said Lee’s movement inside the box reminds the Brazilian of Romario. “[Lee] is one of the best players [in the competition],” said Flavio.

“The U-20 national team grows day by day,” he said. “It is a great pleasure to watch them develop.”

Flavio recalls the Korean national team making it all the way to the semi-final in 2002 - taking the entire world by surprise - and hopes that he will be able help Korea to match that feat during the U-20 World Cup.