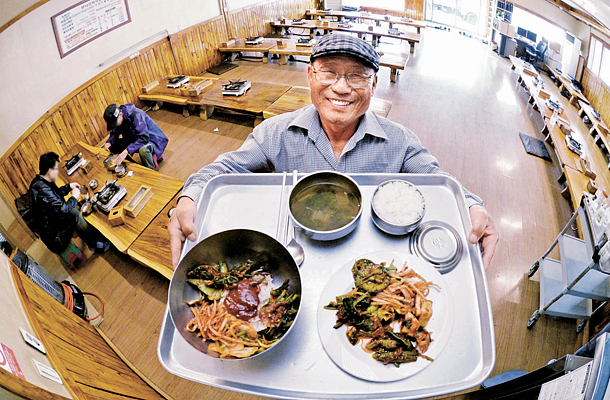 Kim Il-chun holds up a 1,000 won breakfast. People can eat for free or show their appreciation with a 1,000 won payment. [KIM SUNG-TAE]

The 1,000-won breakfast comes with rice, an assortment of side dishes such as kimchi, greens or sliced radish and a bowl of soup.

There were 80 or so people crowded in the restaurant on Monday morning. Street cleaners ending their shifts plowed through plentiful portions of four to five kinds of side dishes. There were plates of radish kimchi, muchim (vegetables seasoned with vinegar and other condiments), gochu saewoo bokkeum (stir-fried shrimp with Korean chili pepper). Kim bustled about distributing bowls of rice and doenjang soup.

A steady stream of people - among them small businessmen, day laborers, white-and blue-collar workers - frequent the restaurant during the working week.

“I come to this restaurant often to fill my famished stomach after picking up the [trash],” Oh Sun-gyun, a street cleaner, said. “I could put my financial worries at ease because I could eat rice and side dishes to my heart’s content for only 1,000 won.”

To customers’ delight, the side dishes and soups change every day.

The couple started the 1,000-won breakfasts in 2008. For a couple of weeks, the breakfasts were actually offered for free.

“After doing business in kimchi manufacturing and sales in 1990, we opened a restaurant in 2006 to use the kimchi we made and didn’t sell,” Park said. “With our business thriving, we wanted to help the people living around us with this opportunity of breakfasts at no cost at all.”

What the couple didn’t anticipate is that people felt embarrassed by this act of charity. They stopped coming

“We asked people why there weren’t many customers coming to the restaurant that offers totally free breakfasts,” Park said. “They told us, ‘Because you gave it away, I couldn’t come because I felt ashamed.’” One customer told Park and Kim that even paying a penny would do away with the shame. “On his advice, we changed it to 1,000 won,” she said

Kim and Park placed a yellow basket in a corner of the restaurant into which customers slip their 1,000 won payments. That anonymous payment system allows someone to eat for free if he or she really needs to.

After breakfast, they offer other lunches and dinners at regular, modest prices. Some of their specialties are chicken stew, marinated pork and roast duck. For the breakfasts, Park prepares the side dishes and soup the night before and Kim starts the rice at 5 a.m.

“Offering a hot breakfast for the price of a bowl of rice, the Manna Kimchi restaurant is the pride of the area,” said Lee Jeong-su, a regular of the restaurant, said. “They have such big hearts for their neighbors!”

Manna Kimchi offers the 1,000-won breakfast every day of the year except during the Lunar New Year and Chuseok holidays.