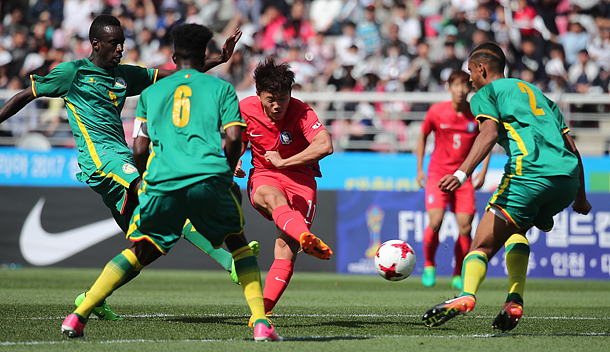 Cho Young-wook scores Korea’s first goal in the 18th minute during a friendly match against Senegal at Goyang Stadium in Gyeonggi on Sunday. [YONHAP]

Korea played to a 2-2 draw with Senegal on Sunday in their final tune-up match for the FIFA U-20 World Cup at home.

Cho Young-wook scored a goal and set up another for the U-20 World Cup host, but the African opponents earned their equalizer in the late second half to avoid a defeat at Goyang Stadium in Goyang, Gyeonggi.

This was Korea’s last tune-up match before entering the U-20 World Cup. The 24-team FIFA tournament will be staged in six local cities from Saturday to June 11.

In the U-20 World Cup, the young Taeguk Warriors are in Group A with Argentina, England and Guinea, while Senegal are in Group F with the United States, Ecuador and Saudi Arabia.

Senegal, runners-up in the African qualification behind Zambia, tested Koreans early with forward Ibrahima Niane. The 18-year-old delivered shots on target in the eighth and 17th minutes, but both attempts went straight to Korean goalkeeper Song Bum-keun.

Korea opened the scoring in the 18th when Cho Young-wook poked the ball into the empty net. Senegal goalkeeper Lamine Sarr left the box trying to clear a through ball from Lee Seung-mo, but his clearance hit teammate Waly Diouf and fell on Cho, who easily finished it with his right foot.

Senegal, however, leveled the score in the 31st with Niane’s goal. Mamadou Mbaye headed down Souleymane Aw’s free kick and the ball went to Niane, who found the net with a header.

FC Barcelona B midfielder Paik Seung-ho then stepped up to give the lead back to Koreans in the 36th. After receiving a through ball from Cho, he fired a right-footed shot in the box to entertain some 12,000 fans at the stadium.

In the second half, FC Barcelona Juvenil A forward Lee Seung-woo led Korea’s attack. He first tested Senegal defenders with a curling right-footed shot in the 62nd that went slightly over the net, and fed Lee Jin-hyun in the box in the 69th with a slick pass, although it didn’t ended up with a goal.

Korean goalkeeper Song made a superb save in the 84th to deny Pape Habib Gueye’s header. However, Korea couldn’t keep up the lead as they allowed the equalizer in the 85th when Souleye Sarr’s header off a corner beat Song.