Son given second Player of the Month award

Son given second Player of the Month award 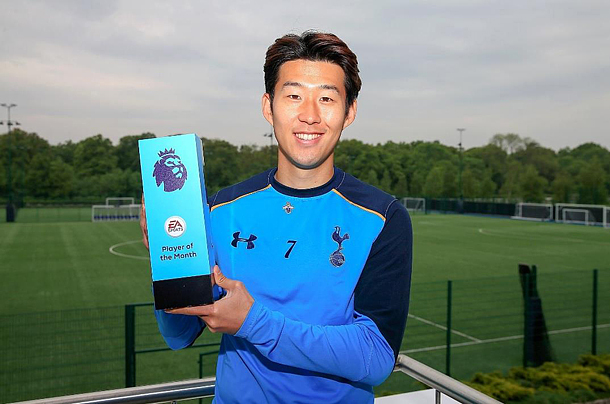 Son Heung-min of Tottenham Hotspur poses with the Player of the Month trophy on Friday. Son became the first player to win the award twice this season. [EPL SCREEN CAPTURE]

Only given eight times a season, the Premier League’s Player of the Month title is considered one of the hardest awards to earn.

He is the second Tottenham player to win it twice in a season, joining Harry Kane, who completed the feat in the 2014-15.

“It’s an unbelievable feeling - I’m very thankful for the fans who voted for me,” Son said in an interview for the EPL’s official website. “This is not my finish line. I want to keep working hard and win it a third time. I’m still hungry.”

The 2016-17 season has been the best season of Son’s career and he has set multiple records. In March, Son scored his third career hat trick and the first with his current club, becoming the first Korean to do so in the Premier League.

When Son scored his ninth goal against Swansea City in April, he surpassed Swansea midfielder Ki Sung-yueng to become the new single season record holder for an Asian player in the EPL. He has also tied with veteran footballer Cha Bum-keun to become the highest-scoring Korean in a single season in Europe with 19 goals.

In addition to Son, Mauricio Pochettino, manager of Hotspur, was named the Barclays Manager of the Month.