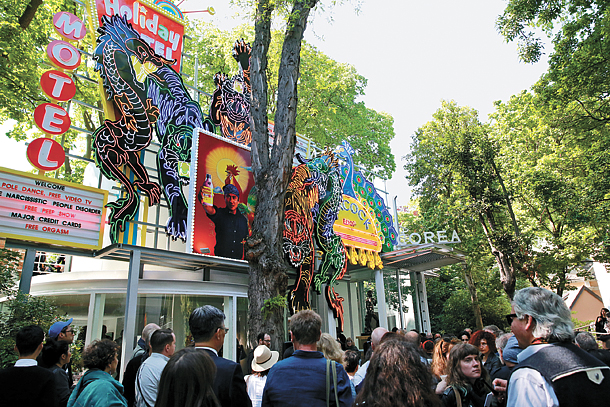 VENICE - Giardini Park is home to 30 national pavilions that have been built over the Venice Biennale’s 122-year history. Tucked into a hard-to-find spot in the far reaches of the park is the Korean Pavilion. However, in the preliminary opening of the 57th Venice Biennale held on Wednesday, spotting the Korean Pavilion, run by Arts Council Korea, wasn’t difficult at all - flashy neon signs more fitting of Las Vegas or Macau, covered its facade and spectators were crowded in and around the building. 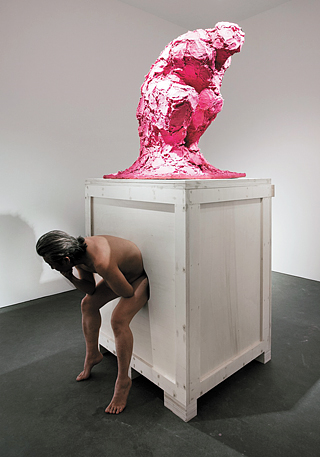 Cody Choi, one of the two artists displaying their work at the Korean Pavilion, presents his artwork that represents the 1990s, “The Thinker.” [ARTS COUNCIL KOREA]

The neon signs were a work by Korean artist Cody Choi, titled “Venetian Rhapsody.” Choi and artist Lee Wan, as well as curator Lee Dae-hyung have made this year’s Korean Pavilion exhibition.

Although the Golden Lion award went to the German Pavilion, lead by artist Anne Imhof, at the official opening of the Biennale on Saturday, the Korean Pavilion has been talk of the town. The Art Newspaper, a major British publication covering the art world, picked Korea as one of the eight highlights of the 87 national pavilions. Artsy, a major art information and trade website, also put Korea on its list of “The Venice Biennale’s 11 Best Pavilions.”

With “Venetian Rhapsody,” Choi said that he intended to satire the biennale’s bluff, in an interview with the Korea JoongAng Daily. “Artists act like they’re all stars [in the biennale], while art critics and dealers say that they have come here to find budding artists but they actually mean new businesses. Its no different from Las Vegas.” With the work, the artist also pokes fun at the “casino capitalism” of the art industry, a term referring to a society controlled by speculative financial capital. 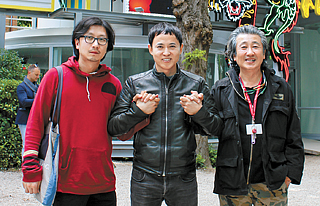 Like the artist pointed out, the world’s largest art event is contradictory as well as complex. It gave up the art fair-esque characteristics that it initially had in its inception and transitioned into a non-commercial event in 1968. But, the biennale is still a playground for art dealers and collectors looking for the next big artist.

Yeesookyung, an artist who was invited to the Venice Biennale’s main International Art Exhibition, also spoke about the commercial atmosphere of the festival. Of the 120 artists invited, Yee and artist Kim Sung-hwan are the only Koreans. Yee has garnered much interest through “Nine Dragons in Wonderland,” a gigantic gold-lacquer-patched collection of fragments from broken ceramics, but was frustrated due to many gallerists inquiring “not on the meaning of the artwork, but if I had [a sellable] small version of the artwork” numerous times. 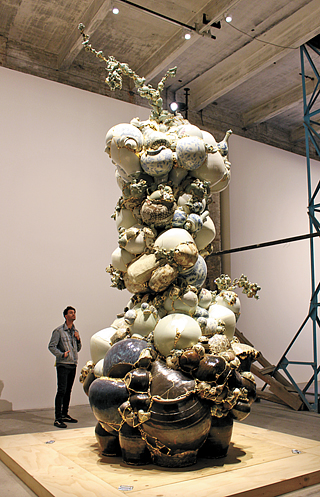 There is also a contradiction in the cosmopolitanism the biennale wishes to emphasize. The biennale stressed the artistic properties that transcend nationalities rather than continue the tradition of “international competition” that the festival has long been known for. To further highlight the shift in the biennale’s direction, the fourth-ever female director of the event, Christine Macel, chose “Viva Arte Viva” as the theme of the central show, dividing it into nine sections called “Trans-Pavilions.” Nonetheless, the pavilions of each nation still exist and the competition between pavilions is still very much intact.

Furthermore, the West, which once advanced globalization through imperialism and later through free trade pacts and international events like this one, is now experiencing a rise in neo-isolationism and neo-nationalism.

Choi’s exhibition at the Korean Pavilion, is the results of the cultural conflicts that the artist, born in Korea in 1961, experienced personally and socially during his career between the mid-80s until the mid-2000s in the United States. Choi’s “The Thinker,” drenched in hot-pink liquid, is the most exemplary of them all.

Regarding the work, the artist said that he had believed he knew the West through the Westernized education and the imported Western culture in Korea, but was so shocked when he arrived in the U.S. by the gap between “the West” he imagined and his new reality.

As a result of the shock, he suffered from indigestion for many years and had to rely on Pepto-Bismol, a pink American digestive medicine. 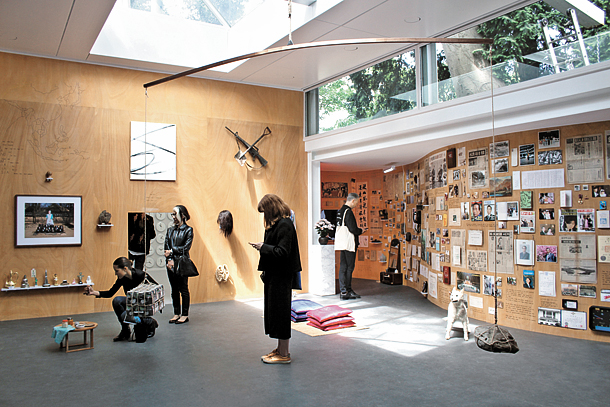 Visitors to the Korean Pavilion view artist Lee Wan’s works including the installation of found objects, titled “Mr. K and the Collection of Korean History” on Tuesday. [MOON SO-YOUNG]

Meanwhile, Lee’s installation “Mr. K and the Collection of Korean History” and video and objet series “Made In,” are placed on opposite sides of the Korean Pavilion.

“Mr. K and the Collection of Korean History” is based on Lee’s discovery of the personal effects of one man, Kim Ki-moon (1936-2011) in a flea market, such as his family photo album and a few certificates he received when he was young. With Mr. K’s belongings juxtaposed with the artist’s own collection of artifacts, Lee traced and re-constructed not only an individual’s history but also the history of modern Korea.

“Made In,” on the other hand, shows the process of Asian countries’ struggles with modernization and globalization. For the series, the artist went to more than ten Asian countries, and while there, produced a variety of consumer goods such as sugar and suit jackets by himself. The items he created are commonly produced through the international division of labor under the global free-trade system.

The video pieces detail the processes along with the final products and data showing the political and economic struggles of each nation. 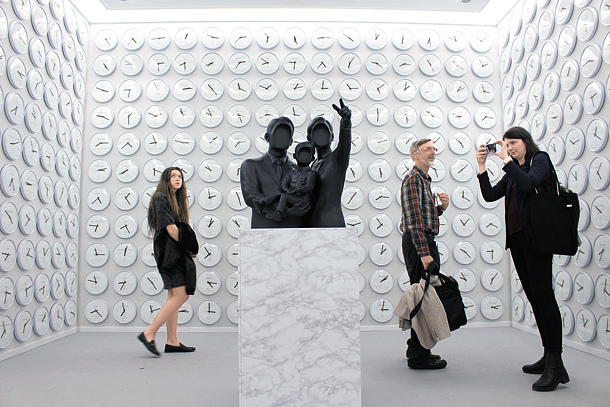 Spectators take a look at artist Lee Wan’s installation work “Proper Time” on the walls and “For a Better Tomorrow,” center, in the Korea Pavilion on Tuesday. [MOON SO-YOUNG]

In between a small door situated between the two aforementioned artworks of Lee’s, is another artwork displayed in an all-white background, titled “Proper Time.” Six hundred and sixty-eight clocks cover the four walls, with each of the clocks engraved with the name, date of birth, nationality and occupation of an individuals that Lee met and interviewed around the world.

Each clock moves at a different pace, depending on the amount of time the individual has to work to afford a meal.

In the center of the room with the four walls covered in clocks, is a fake bronze re-creation of a hopeful family, reminiscent of a public service advertisement Lee, born in 1979, witnessed as a youngster, on a fake marble pedestal during the era of rapid economic development - but the family members are all missing faces.

“The carved out faces of the family members represent the lost values Korea missed out on due to only looking forward during the rapid economic growth,” said Lee, also adding, “we sacrificed the important things for a better future.”

“Mr. K, Cody Choi and Lee Wan represent the three modern generations of Korea,” said curator Lee. “It is a story of each generation represented by each individual, extended to the history of Korea and Asia, Korea’s identity in the global context and the politics behind the formation of that identity.”

The exhibition received mostly favorable reviews. Adam D. Weinberg, director of Whitney Museum of American Art located in New York, said during his visit to the Korean pavilion on Tuesday, “[The Korean Pavilion] is one of the best pavilions. I love Cody’s works. You can tell his single sensibility, though he is working with every kind of media and pointing so many directions, dealing with political, social and personal issues. His works make great drama, but are often quiet. His works are in good harmony with Lee Wan’s beautiful pieces - which are archeological but also have poetic qualities.”

And Martin Honzik, director of the renowned ARS Eletronica’s Festivals, Prix, Exhibitions Division, said, “You have to visit the Korean Pavilion twice. The first time, you come to see the exhibition, and then you return to read the message of the exhibition.

This year’s Biennale failed to address an important point. The world is in much chaos and national pavilions seem to have their eyes closed to the chaos we see in the world. The Korean Pavilion, however, offers a notable critique.”

Also visiting before the official curtain rising of the biennale, was Suh Jin-suk, director of the Nam June Paik Art Center, who had this to say after his visit to the national pavilion on Wednesday: “It’s the Korean Pavilion’s best-ever exhibition in regards to its use of space. There seems to be no disharmony or discord in the space [and the artworks].”