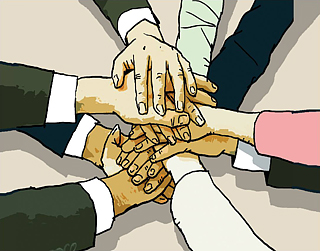 A new chapter in the history of Korean democracy has begun with the inauguration of President Moon Jae-in. The past several months constituted a serious national crisis, but the Korean people have respected Constitutional procedure and shown that we can resolve a political crisis peacefully. It is a triumph that Korea’s democratic civic culture has matured. Koreans know very well how hard it has been to come this far.

From the liberation movement from Japanese occupation, the dream of a democratic republic has been precarious for nearly 80 years since the legislation of the Constitution and establishment of the government. When Korea peacefully ended authoritarianism and accomplished democracy 30 years ago, Koreans pledged to successfully nurture their fledgling democracy as we celebrated the Seoul Olympic Games. However, we continued to experience the challenges of operating a proper democratic state on a divided peninsula. While voters detected the signs of a flaw in the country’s politics and sent a strong warning in the general election of April 2016, the former administration and ruling party politicians failed to respond appropriately and ended up being paralyzed.

The scandal that led to Park Geun-hye’s impeachment and the snap presidential election was undoubtedly a serious constitutional crisis for the administration and democratic politics. However, the power of citizens proved that the only way to protect the democratic republic was to abide by the Constitution and peacefully express the people’s will. In retrospect, I cannot help celebrating the accomplishments of Korean citizens. It has finally become accepted by all Koreans that all power comes from the people, the very principle of citizenship we have acquired through many difficulties over eight decades. Now, we have accepted the civic qualities and social foundation to peacefully operate a democratic republic based on the laws.

France’s presidential election on May 7 and Korea’s on May 9 have meaningful similarities. In his acceptance speech, French President-elect Emmanuel Macron said that he respects the anger, frustration and conviction of the voters who supported Marine Le Pen and will do everything he can so that people aren’t tempted to vote for extremism any more. President Moon Jae-in was sworn in at the National Assembly on May 10 and said there was no winner or loser in this election, and that we are the partners to lead a new Korea. Both Macron and Moon emphasized that national integration is the key that determines the future of France and Korea.

Needless to say, national unity is a requirement for successful operation of a democratic state. The challenge is how to reach national consensus for national unity. The key is the context and scope of national agreement or division on ideological standards.

We have all asked the questions, “What kind of nation is Korea?” and “What does it mean to be a Korean today?” I am not sure whether there is a national consensus on those broad questions. People may have different ideas. What is the Korea that we want to make? We need to make efforts to reach a national consensus on what kind of community we hope to make. The Moon Jae-in administration will lead the task, and we have a solemn civic duty as we acknowledge that people are the nation.

A national consensus, especially an agreement on ideological standards, is reached not in a vacuum but in the process of history. It will have power when people are wary of being trapped in ideological abstraction and engage in specific work and tasks. Through the impeachment and presidential election, the people have clearly demanded a productive system reform to organically link people’s participation and engagement with the legislative process in the National Assembly established for representative democracy.

*The author is a former Prime Minister and an advisor for the JoongAng Ilbo.