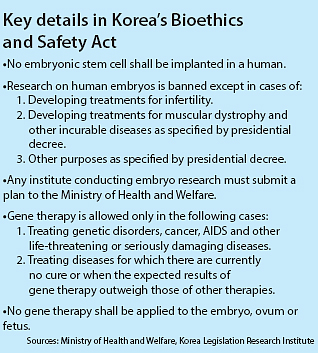 Despite the upsides of advanced genome editing techniques like CRISPR/Cas9, the technology does not come without its share of risks, regulatory barriers and ethical concerns.

For example, if gene editing is done on a child or adult, the edited gene won’t pass to any offspring. But in the case of reproductive cells and embryos, any new genes will be passed on to future generations and trigger unintended consequences. Existing molecular scissors sometimes do cut in the wrong place, but their accuracy and precision are improving.

This is why an international group of scientists sought a moratorium on using CRISPR technology on human embryos during a conference in 2015.

There, David Baltimore, former president of the California Institute of Technology, raised the need for public discussion and consensus on whether humans want to change their own genetic makeup using the technology.

Even the pioneer of CRISPR, UC Berkeley Prof. Jennifer Doudna, has called for caution in its use.

“In our view, genome editing in human embryos using current technologies could have unpredictable effects on future generations,” a group of scientists wrote in an op-ed published in Nature in 2015. “This makes it dangerous and ethically unacceptable. Such research could be exploited for non-therapeutic modifications.”

“The current ability to perform quality controls on only a subset of cells means that the precise effects of genetic modification to an embryo may be impossible to know until after birth,” they said.

In Korea, gene editing research is subject to relatively stricter rules because of ethical issues and an infamous scandal that involved a biologist, Hwang Woo-suk, fabricating stem cell results.

Under the country’s Bioethics and Biosafety Act, gene therapy, including gene editing, is generally banned except in cases where they treat genetic disorders, cancer, AIDS and other life-threatening diseases where there currently is no cure or when the expected results of gene therapy outweigh those of other therapies.

“Korea is the only country in the world with such strict regulations,” said Kim Jin-soo, a professor of chemistry at Seoul National University. “Safety can be ensured when researchers report the purpose and plans of gene editing experiments to the Health Ministry. The current regulation, however, somewhat blocks research efforts.”

Faced with growing calls from the biotech industry to lift regulations, some bioethicists and experts have expressed concerns about the tail wagging the dog.

“Before we ease regulations, we should thoroughly investigate the technology,” said Kim Hoon-gi, a liberal arts professor at Hongik University. “We need more information about the technology’s safety and efficacy.”