The many ways to save on car insurance

The many ways to save on car insurance 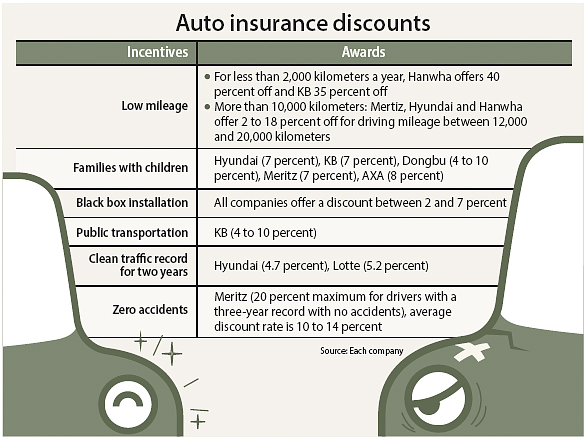 It turned out she qualified for discounts that she was unaware of.

Shin mostly drives on the weekends, and during the week, her use of the car is limited to shuttling her kids to and from school. In total, she only drives about 8,400 kilometers (5,200 miles) a year, making her eligible for a discount given to customers who drive less than 10,000 kilometers a year.

Shin, who has a 3-year-old and 5-year-old, also qualified for a 7 percent discount for families with children under the age of 6.

“I was able to save 290,000 won just by sending a photo of my odometer and a document showing my family members,” she said. “I wish I could have known about these discounts earlier.”

Drivers in Korea are required to have car insurance. There are 11 companies in the country that sell auto insurance, and competition between them has become fierce, leading many to devise the sort of incentives that Shin has been able to enjoy.

One of the main ways insurance firms determine premium cost is by looking at how much people drive. Companies believe that those who spend less time on the road are less likely to run into accidents. People who drive fewer than 2,000 kilometers a year can receive up to 40 percent off from Hanwha General Insurance and 35 percent from KB Insurance.

Samsung Fire & Marine Insurance gives discounts of up to 23 percent to people who drive less than 10,000 kilometers a year. Dongbu Insurance raised its maximum discount rate for low-mileage drivers from to 26 percent this year from 17 percent.

Currently, an estimated two out of three drivers in the country do not receive low-mileage discounts. It’s not hard to sign up for them. Drivers only need to send a photo of their odometer to their insurance providers.

Hyundai first introduced the concept last May with discounts of about 7 to 8 percent for drivers with children younger than 7.

Drivers who have installed black boxes can also receive discounts. Insurance firms give them around 2 to 7 percent off.

Another incentive that many policy holders might not be familiar with is discounts for those who use public transportation often.

KB Insurance first introduced the idea and gives 4 percent discounts to drivers who spent more than 120,000 won on public transportation in the past three months. It gives up to 10 percent for people who spent 150,000 won. The discount is given regardless of mileage.

There are a few other ways to save, too. Hyundai and Lotte Insurance give about 5 percent off to customers who haven’t violated traffic laws in the past two years.

Policy holders who can prove they’re driving for public institutions like the military can also get a discount.

One of the most satisfying incentives offered by insurance firms is the no-accident discount. Hyundai increased the discount for drivers who are accident-clean for three years to 10.2 percent this year from 9 percent.

And of course, if policy holders have other drivers listed in their policy, they can save money if they let their insurance provider know when their co-signers are no longer actively driving.