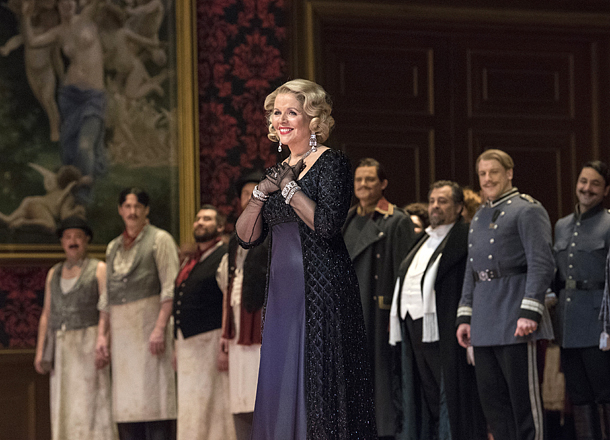 Soprano Renee Fleming looks to the audience during the curtain call for Richard Strauss’ opera “Der Rosenkavalier” in New York on Saturday. Fleming retired the role of the Marschallin on Saturday after 22 years. [AP/YONHAP]

NEW YORK - Renee Fleming sang the famous “Ja, ja” one last time, acknowledging the ascendancy of youth, and made a graceful exit from the stage.

The 58-year-old soprano, the most well-known American classical singer, performed the Marschallin in Strauss’ “Der Rosenkavalier” for the final time Saturday in what may have been her farewell to staged standard repertoire.

Confetti fell from the top of the Metropolitan Opera and bouquets were thrown from the crowd during a nine-minute ovation that followed the performance on the final day of the company’s 2016-17 season. Fleming plans to concentrate her appearances on concerts and will consider singing in new operas.

Fleming first sang the Marschallin, an aristocrat who accurately predicts her lover will leave her for a younger woman, at the Houston Grand Opera in 1995. Saturday was her 70th staged performance of the role, which included productions in San Francisco, London, Paris, Zurich, Baden-Baden and Munich, and with the Met on tour in Japan. She sang additional concert versions in Boston and Paris.

“I feel satiated,” she said outside her dressing room. “It’s time - time to say goodbye.”

She was 36 for her first Marschallin, four years older than the age of the character created by composer Richard Strauss and librettist Hugo von Hofmannsthal for the opera, which premiered in 1911.

“Nothing seems like 22 years. Where did it go?” Fleming said.

The Marschallin is one of her most acclaimed roles and it seemed an apropos choice. She wistfully sings during her first act monologue: “Time is a strange thing. While one is living one’s life away, it is absolutely nothing. Then, suddenly, one is aware of nothing else.”

A lyric soprano whose voice never deepened, Fleming made her Met debut in 1991 as the Countess in Mozart’s “Le Nozze di Figaro” and has sung more than 250 performances with the company. She feels she has aged out of her most famous roles, which included Violetta in Verdi’s “La Traviata,” Desdemona in Verdi’s “Otello,” the “Countess” in “Figaro” and Tatyana in Tchaikovsky’s “Eugene Onegin,” and is looking at new challenges.

Fleming will be on Broadway for the second time next spring, in Rodgers and Hammerstein’s “Carousel.” She will record the voice of Julianne Moore’s character in a movie version of “Bel Canto,” a novel by her friend Ann Patchett, and is receiving proposals to sing in new compositions.

Kevin Puts’ “Letters from Georgia,” a song cycle premiered by Fleming in November based on Georgia O’Keeffe’s writings, could be expanded into a stage work. And in addition to performing, she is a vice president and creative consultant at the Lyric Opera of Chicago and artistic partner at the Kennedy Center in Washington, D.C.

Her daughters and sister attended Saturday’s matinee at the 4,000-capacity Met, a performance simulcast to theaters around the world and broadcast live on radio. The Robert Carsen staging, first seen in London in December, updates the setting from the 1740s to 1911. Mezzo-soprano Elina Garanca was singing the trousers role of Octavian, the Marschallin’s lover, for the final time, and Erin Morley was Sophie.

In the opera’s most famous music, the third-act trio, the Marschallin tells Octavian to follow his heart with Sophie. Fleming gave a knowing look as she responded with the “Yes, yes,” to the declaration, of Faninal, Sophie’s father: “That’s how they are, young people.”

Fleming said she was able to maintain focus on her character and not get caught up in her own thoughts.

“The trio is too hard,” she said. “You can’t sing the trio and be emotional. But once I finished it, then, yeah, you allow yourself to feel. You have to pick your moments.” AP