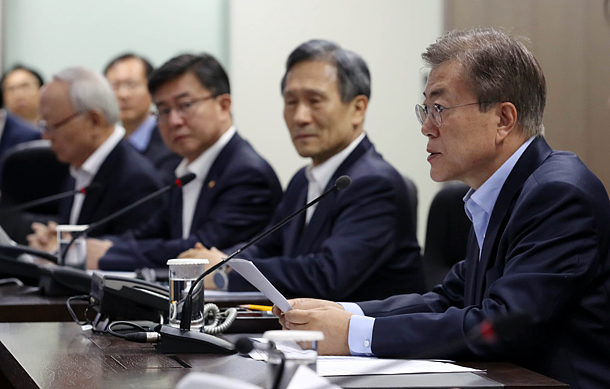 President Moon Jae-in, right, presides over a National Security Council meeting at the Blue House that began at 8 a.m. in response to North Korea’s missile test at 5:27 a.m. from North Pyongan Province. It was Pyongyang’s first military provocation since Moon was sworn in on Wednesday. [YONHAP]

North Korea fired a ballistic missile early Sunday morning that flew about 700 kilometers (435 miles) before landing in the East Sea, South Korea’s Joint Chiefs of Staff said in a statement on Sunday.

The missile launch was the first since President Moon Jae-in was inaugurated last Wednesday, replacing impeached leader Park Geun-hye, who is jailed awaiting a corruption trial.

It came just hours before China, North Korea’s greatest ally, kicked off a two-day economic forum highlighting President Xi Jinping’s so-called Belt and Road Initiative, which focuses on connectivity and cooperation mainly between China and the rest of Eurasia.

The Belt and Road Forum for International Cooperation, held in Beijing, was attended by 29 foreign government leaders or heads of state including Russian President Vladimir Putin, according to China’s state-run Xinhua News. Delegations from South Korea, the United States and also North Korea participated as well.

South Korea’s military said the missile was launched around 5:27 a.m. from the northwest city of Kusong, in North Pyongan Province, which is about 118 kilometers northwest of Pyongyang, the North Korean capital, and 55 kilometers south of the border with China.

The type of projectile was not immediately known, as is usually the case with North Korean missile tests.

Japan’s Defense Ministry said the missile flew for about 30 minutes, reaching an altitude of more than 2,000 kilometers and was believed to have traveled some 800 kilometers before falling about 400 kilometers outside of Japan’s exclusive economic zone, according to the Japan Times.

Japanese Defense Minister Tomomi Inada was quoted as saying that the launch, which was likely conducted at a steep or “lofted” trajectory, could be of a “new type of ballistic missile.” It hit the highest-ever altitude recorded by Japan’s defense authority for a North Korean missile.

The U.S. Pacific Command ruled out any chance that it was an intercontinental ballistic missile, which North Korean leader Kim Jong-un said his country was in its “final stages” of test-launching in a New Year’s address on Jan. 1.

North Korea launched 10 ballistic missiles this year in seven tests, the most previous on April 29, nearly 12 hours before a U.S. Navy strike group led by the USS Carl Vinson was to enter South Korea’s East Sea for joint military drills with the South Korean Navy.

President Moon convened a National Security Council (NSC) meeting at the Blue House at 8 a.m. Sunday and called the latest provocation a “blatant violation of the UN Security Council resolutions,” which ban Pyongyang from seeking missile technology, and a “grave threat not only to the Korean Peninsula but also to the international security.”

“As I said before the people, I promised to do all I can to settle peace on the Korean Peninsula,” the president was quoted as saying by Yoon Young-chan, senior presidential press secretary during a press briefing.

“Despite my promise, I deeply regret that the North’s reckless provocation came just days after the new administration’s inauguration, and at the same time express my grave warning [to Pyongyang],” said the president.

The NSC meeting lasted for an hour and a half and was attended by National Defense Minister Han Min-koo, Foreign Affairs Minister Yun Byung-se, Unification Minister Hong Yong-pyo and presidential national security advisor Kim Kwan-jin, among others.

Fox News reported that the White House said North Korea has been a “flagrant menace for far too long” and that Trump “cannot imagine that Russia is pleased” with the latest missile test because the missile landed closer to Russia than to Japan. U.S. National Security Adviser H.R. McMaster also condemned the launch in a 25-minute phone call with his South Korean counterpart Kim Kwan-jin and agreed to combine forces towards denuclearizing the Korean Peninsula.

The Associated Press reported Sunday it was told by Hua Chunying, China’s foreign affairs spokeswoman, that the situation on the Korean Peninsula is “complex and sensitive,” and that countries “should not do things that further escalate tensions in the region.”

Japanese Prime Minister Shinzo Abe was quoted by the Japan Times as saying that North Korea’s behavior was “absolutely unacceptable” and that the repeated missile launches were a “grave threat” to Japan and a clear violation of the UN Security Council resolutions.