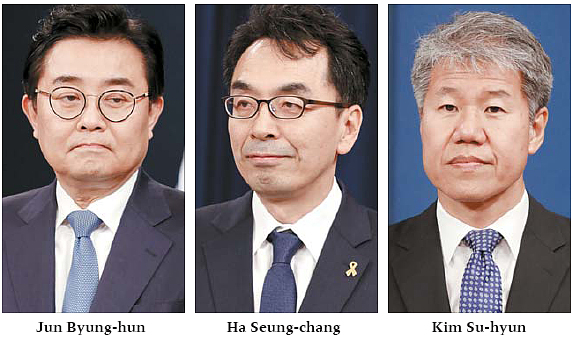 President Moon Jae-in on Sunday named former three-term lawmaker Jun Byung-hun as his senior secretary for political affairs, who coordinates policy issues between the presidential office and the National Assembly, a daunting job given the current parliamentary landscape.

With Jun, a seasoned politician who served as floor leader for the Democratic Party (DP) and a member of the party’s supreme council during his 12 year-career at the National Assembly, the new administration is seeking to deal with a multiparty parliamentary system in which the ruling DP - with its 120 lawmakers - faces four opposition parties in the 300-member chamber.

Knowing the difficulty of the job in advance, Jun vowed to reach across the aisle to allow the Moon government to push through the ambitious agenda it promised during the campaign.

“As a person who spent five years in the Blue House (for the Kim Dae-jung government) and 12 years in the Assembly, I think I stand as one of those who are keenly aware of political opinions from both sides of the aisle,” said the newly appointed senior secretary.

Jun served as a secretary for political affairs for the late President Kim Dae-jung.

Jun said the new administration could produce a breakthrough in reaching agreements with the opposition bloc because Moon was more willing to communicate than his predecessors.

“Though it has been only a few days, I think all of you journalists have already seen Moon taking the lead in a new political paradigm.”

When asked whether Moon could appoint a figure from the opposition to a cabinet position to help foster bipartisan cooperation, Jun declined to answer.

Rumors are circulating that Justice Party Rep. Sim Sang-jeung, who received 6.17 percent of the votes in the May 9 presidential election, could be considered by the Blue House to head the Labor Ministry.

Ha Seung-chan, senior secretary for social innovation, vowed during a press briefing Sunday that he would strive to provide assistance to civic groups.

Contributing to the growth of the civic sector would be his top priority, he said.

Ha, former deputy mayor of Seoul, cited the anti-Park Geun-hye candle light vigils as a demonstration that the public has become an important force in shaping the government’s agenda. Ha’s remarks reflected the Moon government’s emphasis on the role of civil society and its contribution to the dramatic downfall of former President Park.

Kim Su-hyun, senior secretary for social affairs, is a longtime policy advisor to President Moon, helping him with economic issues, especially urban planning, in monthly meetings that began in 2013.

As a member of Moon’s inner policy advisory group Simcheonhoi, Kim was one of a handful of academics meeting with Moon once a month over the past four years.

Remarking that while many lamented during the Roh Moo-hyun government that the economy stagnated, times were not easy for people under two conservative governments either, he said.

And this cycle of economic stagnation, he said, had made him think Korea had passed an “inflection point from fast economic growth to low growth”.

A graduate of Seoul National University majoring in urban engineering, Kim said he would pour efforts into “finding and developing policies to improve the livelihoods of the people.”