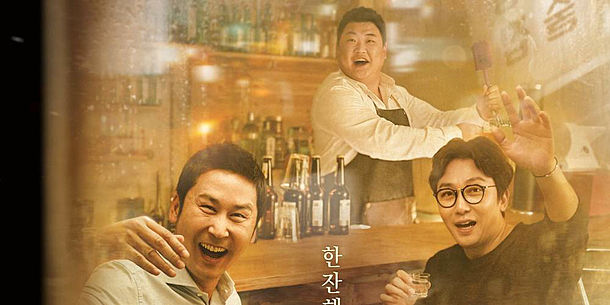 It’s no secret that alcohol has a special place in Korea’s social culture. It’s often consumed heavily both in good and in bad times, and also a large intake is often considered a virtue among the workplace buddy culture, especially among men.

When Moon Jae-in - the country’s new president - was certain to win the presidency on Tuesday evening, South Chungcheong Province Gov. An Hee-jung, a liberal politician who used to be Moon’s primary rival, nudged a euphoric crowd of Moon supporters at a public square in Seoul’s Gwanghwamun area to “enjoy this night until the beer runs dry.”

But from a media perspective, drinking, along with smoking, hasn’t always necessarily been met with open arms. How booze and cigarettes were treated by the media was dependent on the times - partly due to how TV broadcast regulations remain vague and open to various interpretations.

Standards weren’t necessarily applied equally to these supposed ills to society. For example, scenes with TV stars smoking weren’t difficult to see in the ‘80s and early ‘90s. But nowadays, it’s virtually impossible to see such scenes, as they’re excluded from preproduction. When a rerun of an old show or a movie is aired, such footage is often blurred out.

But drinking, by all accounts, seems to be going the opposite direction - it’s not only common to find shows featuring drinking nowadays, some are even seen depicting booze in a romantic fashion.

The most notable example of this trend is tvN’s “Life Bar,” a late night talk show that’s filmed at a fictitious studio pub with the same name as the title.

The weekly program, hosted by comedians Shin Dong-yeob, Kim Hyun-joon and singer-celebrity Tak Jae-hoon, is an unscripted show that tries to tap into the deep inner thoughts and emotions of the guests through a relaxing and seemingly natural looking set resembling an actual pub.

Director Oh Won-taek has said that the show’s intent is to “create a talk show where stars tell ‘real stories’ unheard anywhere else, as opposed to other pre-existing talk show formats.”

The weekly program first aired in December with a discretionary viewing age of 15 and older, but since February, it has been raised to adults only, to turn the program into “a talk show that adults can truly empathize with.”

TvN also aired “Drinking Solo” late last year, a drama about lecturers, students and employees of a fictitious private institution that prepare for the civil service exam around the area of Seoul’s Noryangjin area. The show was inspired by the actual growing trend of drinking alone in South Korea.

In the show, characters fancy drinking alone after work for their own reasons. The story also depicts the romance between Jin Jung-suk and Park Ha-na, played by Ha Seok-jin and Park Ha-sun, respectively. The show was a ratings success and also received acclaim for depicting the lives of the unemployed and downtrodden in a realistic light.

Reality TV shows and the country’s famous meokbangs, or eating shows where celebrities gorge on gastronomic delicacies, aren’t also shying away from including alcohol-related content.

KBS2’s “Battle Trip,” a travel and food reality show, earlier this year aired footage of the cast consuming beer and whiskey during visits to Japan and China.

Outside of television, K-pop stars are releasing songs about drinking. To be fair, it’s not as if drinking, historically speaking, hasn’t been a perennial subtopic for many love ballad songs, but like on TV, booze seems to be making more prominent appearances in K-pop lyrics.

The lyrics for girl group DIA’s recent song “You Are My Flower” is about binge drinking and singer-songwriter Suran’s hit song “If I Get Drunk Today” is, as the title suggests, about getting wasted after becoming heartbroken.

To offer some context, this trend does seem to reflect how booze is increasingly being seen not just as a product consumed for pleasure or joy, but also that of comfort and solace for the depressed and stressed-out modern man/woman, with many Koreans beginning to make time for themselves in a trend called honsul, or drinking solo.

But putting aside alcohol’s place in the country’s societal culture, some critics argue that an increase in booze-related television shows can have a detrimental effect on children and teenagers, given how it’s virtually impossible to ban access to such material in the age of smartphones.

And while shows including booze are aired late in the evening - along with apt warnings for viewer discretion - a lot of these programs are also rebroadcast on cable networks in the afternoon.

“I believe such booze-related shows are products of the evolution of meokbangs. As more people tend to drink than before, I think the shows are reflecting that real-life trend and also trying to include more stimulating content, such as alcohol,” Ha Jae-keun, a Seoul-based cultural commentator, said.

Ha added: “But like the prevalent public awareness of smoking hazards, side effects of binge drinking are also becoming more and more evident. I think it is time for the industry to consider the negative aspects of excessive drinking as well.”