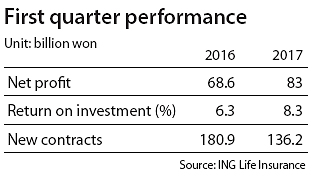 As a result the company’s return on equity has risen from 6.3 percent a year ago to 8.3 percent.

The company said a recent rise in interest rates has helped profits by lowering its payments of guaranteed minimum benefits on variable annuities. New contracts for insurance policies rose 32.9 percent. All sales channels including through financial consultants, branches and through banks saw double-digit growth.

The Q1 results came at a time when the company became the fifth life insurance company in the country to be listed on the benchmark Kospi and the second in two years, following Mirae Asset Insurance in 2015. ING Life Insurance went public on Thursday.

The IPO has been closely followed due to unusual circumstances. It was the first company fully owned by a private equity fund that has been allowed by the government to be listed on the stock market. The company has been owned by Korea’s leading private equity fund, MBK Partners, since 2013.

In an effort to spur the local M&A markets, the government eased regulations so that private equity funds could recoup their investments through IPOs.

Since the IPO, MBK Partner’s stake in ING Life has been reduced to 59.1 percent.

“The company has high fiscal stability when considering its asset management portfolio, low insurance debt and high capital ratio,” said Kim Do-ha, an SK Securities analyst. “And the volatility of its profitability as well as stock value will likely be low. It will be an attractive investment as it is expected to have a high dividend payout.”

The company as of the end of March managed 24.1 trillion won, which is a 2.7 percent increase from 23.5 trillion won a year ago.

While 98 percent of its investments are in conservative holdings including bonds, secured loans and cash reserves, the company said it has been trying to diversify its portfolio particularly into real-estate investment funds.