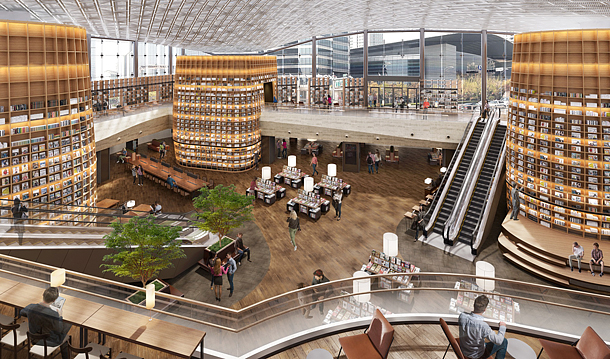 Shinsegae launches its tentatively titled “Open Library” in the center of Starfield COEX in Samseong-dong, southern Seoul, on May 31 which the company expects to boost number of visitors to the mall. Anyone can read 50,000 books there for free. [SHINSEGAE GROUP]

Visitors to Starfield COEX in Samseong-dong will now be greeted by the tentatively titled “Open Library” in the center of the mall, set to open on May 31.

Here, anyone can read some 50,000 books for free. iPads are also there so people can read books online. Rentals will not be available though.

Shinsegae Property, the real estate arm of the retail giant, said Monday it will open a two-story open library inside the mall.

This is one of the first projects to result from Shinsegae’s investment of 6 billion won ($5.3 million) to renew the mall, which was not doing well under the management and ownership of the Korea International Trade Association.

Shinsegae won the operating rights over the mall last year with an annual lease of 60 billion won.

Sofas, chairs, round tables and desks will be set up around the library. A separate meeting room will be prepared for those who want a little private space. There will also be small music concerts, book signing events, poetry sessions and more.

Shinsegae Property said it decided to establish an open library because its latest survey of mall visitors showed that a majority of them wanted a meeting venue inside the mall.

The mall was in decline since it re-opened in 2014, after a two-year renovation in 2012. Although there used to be 50 million visitors a year, according to Shinsegae, that number continued to fall.

“We decided to bet on the country’s first-ever open library inside the mall in order to revive COEX,” said Lim Young-lock, CEO of Shinsegae Property. “Combined with shopping, culture and relaxation, we hope this open library will attract visitors.”

Shinsegae has also renamed the mall Starfield COEX, and if its revival is a success, Shinsegae will be able to establish the so-called “Gangnam belt,” connecting the Gangnam branch of Shinsegae Department Store in Banpo-dong and Starfield Hanam in Hanam, Gyeonggi, located east of southern Seoul.

Currently, Shinsegae is losing a considerable amount of visitors in the Gangnam area to Lotte’s massive mall in Jamsil, southeastern Seoul. COEX might be able to generate a synergy effect with Hyundai Motor’s new Seoul office, Global Business Center, located across the road, which is set to open in 2021 and is expected to include a top-notch hotel, music and exhibition halls.

Shinsegae did not hesitate to bid for the operation rights over COEX last year when its initial competitors, Hyundai Department Store and Aekyung Group, dropped out because of the high commission fee.