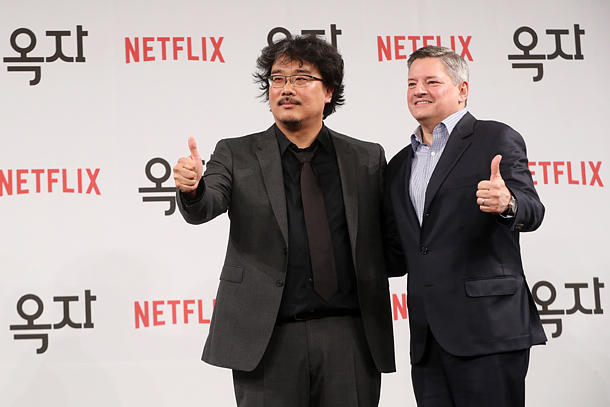 Director Bong Joon-ho, left, and Ted Sarandos, Netflix’s chief content officer, pose at a press conference held Monday in Jongno District, central Seoul, to discuss the upcoming “Okja,” which has been invited to compete at the 70th Cannes Film Festival that will open on Wednesday. [YONHAP]

The drama, which depicts the adventures of a girl, played by newcomer An Seo-hyun, from Gangwon Province and her best friend Okja, a mysterious animal that gets kidnapped by a powerful, multinational company, will hit Korean theaters on June 29 - the same date that it will become available in 190 countries through Netflix.

The movie will enjoy a full release in Korea, but as for North American and European releases, only select theaters in the U.S. and U.K. will offer screenings, according to Ted Sarandos, Netflix chief content officer, during a press conference held at Four Seasons Hotel in Jongno District, central Seoul, on Monday.

“Okja” has created buzz not only because it stars Tilda Swinton and Jake Gylenhaal and has the award-winning director of “Snowpiercer” (2013) and “The Host” (2006) behind the camera, but also because it was invited to compete at the 70th edition of Cannes Film Festival, which is set to open on Wednesday.

Tilda Swinton and a rookie actress An Seo-hyun star in the upcoming drama adventure “Okja,” which will head to Korean cinemas on June 29. [NETFLIX]

“I’m afraid. For a director, there is nowhere more exciting and honorable to introduce a new movie than the Cannes Film Festival,” Bong said at the press event, where the film’s producers, including Jeremy Kleiner from Plan B Entertainment and Choi Doo-ho attended. Kim Woo-taek, CEO of Next Entertainment World, which will distribute “Okja” in Korea, was also at presence.

“Okja is a gigantic animal that looks like a mixture of a pig and a hippopotamus. There is a girl that loves the animal, and the film highlights the love and their adventure. There, of course, are obstacles that block their love. It is the kind of a movie that includes various complicated satires,” Bong explained.

The filmmaker also expressed particular thanks to Netflix and the producers for fully trusting in him as an artist.

The movie streaming service invested $50 million in the movie.

Regarding the controversy over its limited screenings in theaters, which has brought about criticisms from the cinema industry, Sarandos said that Netflix is “not against movie theaters” and does not “mean to harm movie theaters,” but rather, wishes to coexist with them.

Sarandos went on to explain how expanding ways for movie lovers to enjoy films improves the industry as a whole.

“I don’t believe [Netflix] weakens the movie system. It may change the way people behave and the way they see movies… [But] the entire movie industry will get bigger.” Sarandos added that finding great storytellers from around the world and giving them the ability to distribute their films globally is what Netflix does to expand the movie industry.

The discussion came amid the dispute between Netflix and French exhibitors that center on a rule that states a film can only become available on streaming platforms in France a full three years after its release in cinemas.

Just as Netflix is planning limited theatrical runs in the U.S. and the U.K., it also sought for the same compromise in the French marketplace. But France’s National Film Board last week rejected granting Netflix a temporary visa for a limited release of the streaming giant’s film in competition at Cannes, according to an article published in Variety.

Regarding Cannes’ new rule, effective in 2018, demanding that all films in competition secure theatrical distribution in France, Sarandos expressed his faith that the festival would change.

“I think that next year and in the years to come, Cannes will continue to program films that are believed to be the greatest in the world [like ‘Okja’]… The audience is changing, and therefore, distribution changes, and therefore, festivals will change too.”