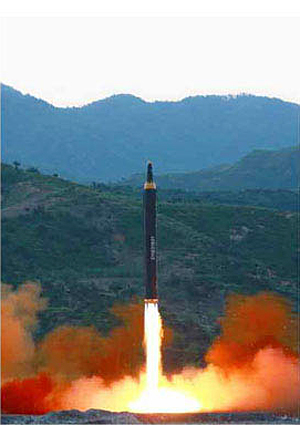 KCNA said the missile, named Hwasong-12, flew 787 kilometers (489 miles) and soared to an altitude of 2,111.5 kilometers along its planned flight trajectory. It was intentionally conducted at the highest angle in consideration of the security of neighboring countries, said the North. Leader Kim Jong-un was said to have overseen the launch on the spot.

Kim was quoted as warning the U.S. that if it ever “awkwardly attempts to provoke” his country, it will face the “biggest disaster” in history. The U.S. mainland and American military bases in the Pacific are within North Korea’s “sighting range for strike,” Kim continued.

More missile tests were forewarned “until the U.S. and its vassal forces make a proper choice with reason.” The North did not specify what proper choice it had in mind.

North Korea’s latest missile was fired Sunday at around 5:27 a.m. from the northwest city of Kusong, in North Pyongan Province, and flew about 700 kilometers before landing in the East Sea, according to South Korea’s Joint Chiefs of Staff. Japan’s military said Sunday that the missile flew for about 30 minutes and traveled 800 kilometers before falling into waters 400 kilometers outside of its exclusive economic zone. South Korean military officials said the type of projectile was not immediately known, but admitted it reached the highest altitude for a North Korean missile so far.

John Schilling, a North Korean analyst, wrote on 38 North that the regime’s successful missile test represented a level of performance “never before seen” from a North Korean missile, adding that it would have flown a distance of some 4,500 kilometers if launched at a flatter trajectory, which would place all of South Korea, Japan and U.S. military bases in Guam within its reach.

The distance between North Korea and the U.S. mainland is approximately 10,000 kilometers.

The intermediate-range ballistic missile may represent a “substantial advance to developing an intercontinental ballistic missile (ICBM),” Schilling wrote, adding that the missile would allow North Korea to conduct at least some of the testing necessary to develop an operational ICBM without actually launching them.

North Korea has never launched a missile that can fly across the Pacific. American and South Korean experts don’t believe it has the capacity yet, though Pyongyang claims differently. In a New Year’s speech on Jan. 1, leader Kim Jong-un said his country was in its “final stages” of test-launching an ICBM.

Citing Uruguay’s UN mission, which holds the UN Security Council presidency this month, the AP reported that an urgent meeting about the missile test will be held at the council Tuesday afternoon, New York time, on the request of the U.S., Japan and South Korea.

Moon, a strong apologist for former Presidents Kim Dae-jung and Roh Moo-hyun’s Sunshine Policy, which highlighted engagement with the North, took a more critical tone Sunday, calling the missile test a “blatant violation of the UN Security Council resolutions” and a “grave threat” to the Korean Peninsula and the international security.

Moon kept open the possibility of an inter-Korea summit, initially proposed last Wednesday in his inaugural speech, but said it can only be held when Pyongyang “changes its behavior.” Moon said he would “react firmly” against any provocation so that the North “does not miscalculate.”