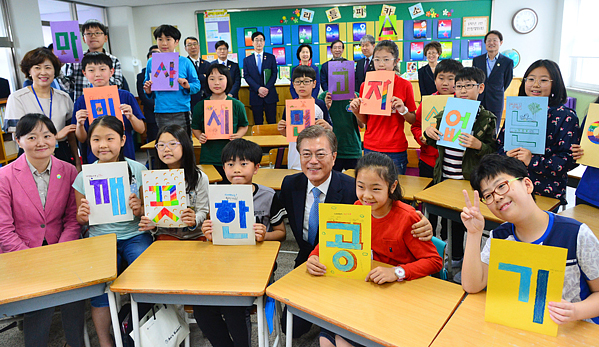 President Moon Jae-in on Monday ordered a temporary shutdown of the 10 thermal power plants that have been running for 30 years or more for the period of June.

He also announced that from next year, the operation of those 10 plants that generate electricity by burning fossil fuel will be suspended from March through June.

Moon’s initiative was announced during his visit to an elementary school in Seoul to mark Teachers’ Day.

Six days into his presidency on Monday, he also vowed to close the aged power plants for the remainder of his five-year term, which ends in 2022, and to set up fine-dust measuring equipment for all 11,000 elementary, middle and high schools in the country.

“It costs 6 million won [$5,348] for each device and will require 60 billion won total,” Moon said. “I will install the equipment at all schools by earmarking funds, if necessary.”

“President Moon’s order to suspend the aged plants reflects his strong will to come up with fundamental solutions to the fine dust problems,” said Yoon Young-chan, senior presidential press secretary, during a press briefing.

Two of the 10 power plants, which are located in the two Jeolla provinces, will be excluded from suspension this year due to a possible power shortage there, but they will be included next year.

According to the presidential office, air pollutants produced by the 10 plants account for 19.4 percent of the pollutants discharged by the country’s 59 power plants. A Blue House official said the 59 plants contribute 14 percent of total fine dust, though it this could vary depending on the weather. “With the shutdown, we expect fine dust level to go down by 1 to 2 percent,” said the official.

It is estimated that by temporarily turning off the 10 aged plants, electricity bills will go up by 0.2 percent. The Blue House said that increase could be covered by the tax-funded Korea Electric Power Corporation.

The new set of measures to fight air pollution comes amid growing public anxiety over deteriorating air quality in recent weeks. Seeing record highs of fine dust levels in early May, when a series of holidays began, many shunned going outdoors and wore masks.

Major regions in Korea such as Seoul, North Chungcheong and Gyeonggi saw the highest concentration this year for PM10, or particulate matter that is 10 micrometers or less in diameter, on May 6, prompting regional governments and the Ministry of Environment to issue alerts.

The Korea Environment Corporation reported that all cities across the country suffered 61 times the fine dust levels rated “bad” during April. The senior presidential official said the matter is grave enough for the former Park Geun-hye government to consider banning diesel-run vehicles from running on select days.