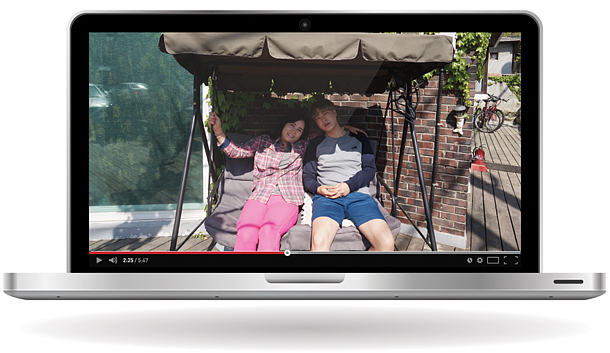 Park Geun-mi, 54, left, and her 29-year-old son Jeong Seon-ho pose in front of their home in Anseong, Gyeonggi. The two are popular YouTube stars that run an individual channel together. Park, in particular, has gained popularity for her unique way of spitting slang at her son. [JIN MIN-JI]

A 71-year-old grandmother may not be the first person that comes to mind as an expert on the latest trends in cosmetics. But the thousands who tune into Park Mak-rye’s make-up tutorials on YouTube have made her into a star. Many of her viewers find her straightforward remarks, helpful tips and her amusing use of Jeolla Province dialect both refreshing and familiar.

With Park and a growing number of jummeonis (a combination of ajumma, meaning a middle-aged woman, and halmeoni, meaning grandmother in Korean) stealing the hearts of younger audiences with their candid personalities, the age of YouTube content creators is becoming more diverse compared to the recent past when most of the hottest YouTube stars were in their 20s or 30s.

Praise such as “You remind me of my mother/grandmother,” and “You are too cute” litter the comment threads below the videos of most of the jummeoni stars, a testament to the connection viewers feel with the ladies on screen.

Below are three popular jummeoni YouTube stars that rose to fame over the last several months.

Perhaps one of the most famous jummeoni YouTube stars is 54-year-old Park Geun-mi, who stars in videos with her son Jeong Seon-ho. Their channel currently has more than 420,000 subscribers.

Jeong, who is currently studying for his doctorate in Chemistry at Sungkyunkwan University, used to run his own personal channel and made content without his mother. But as he found himself being able to spend less time with his mother due to his tight schedule, the 29-year-old mulled over ways to spend more time with her. That is when he decided to pull a hidden camera prank on his mother.

In the first episode, he surprises his mother with his newly-dyed pink hair. Shocked and angry, Park goes berserk and swears at him, repeatedly asking him, “Is this a wig?”

“Since the video contained lots of swear words, I wasn’t going to post it online. But when I showed it to my mother, she found it very funny and laughed it off. She even offered to put it up online herself,” said Jeong.

When Jeong posted the first episode on his Facebook page nine months ago, “the response was explosive,” hitting more than 500,000 views in two hours. Ever since, Jeong has been regularly posting videos featuring him pulling pranks on his mother, which usually follows the pattern of Jeong angering his mother and capturing her slang-ridden outbursts of anger.

The massive response was a refreshing surprise for Park, as she “did not expect the video to go so viral.”

“When I first saw myself in the video, I was surprised at how I look and sound,” said Park, who raised two sons while working as an insurance planner and now runs convenience stores. “I feel happy and energized when appearing in those videos.”

With the rise of followers, more people have begun to notice Park and Jeong on streets.

“When we went to Hongdae [in western Seoul], we couldn’t move,” said Park. “We had to stand in one spot and spend the next three hours taking photos [with fans that recognized us].”

“Some even ask to be yelled at,” Park said with laughs. “[Thanks to becoming a YouTube star], I think I have been able to communicate more actively with people who are around my son’s age.”

Seventy-one-year-old grandmother Park Mak-rye, who has been living an ordinary life running a restaurant for the last 42 years, suddenly became a star after her 28-year-old grand daughter Kim Yu-ra proposed posting videos starring Park about three months ago.

After Park told her family that she had been warned by her doctor about dementia, Kim decided to put Park in front of the camera to help keep her brain active.

“I didn’t even know what YouTube was at first, but now I tell others that YouTube is a lot more fun than playing Go-Stop [a popular Korean card game],” Park said in her distinct dialect, which is what she is loved for.

“(While putting on eye shadow) You put on both blue and red,” she instructs viewers.

In a video introducing ways to use makeup to look younger, Park advises her viewers not to “copy everything. You will look like a newborn baby if you do it wrong.”

Starting her own YouTube channel was her first big challenge, but Park has continued to expand her boundaries through her content. She has since made videos of her trying new things like eating pasta for the first time and kayaking, which have endeared her to a growing number of followers.

Most recently, she has a new dream to travel around the world.

“When I was young, I wanted to live as a good wife and a wise mother… I didn’t look back and just faced forward without having any dreams. And now, in my seventies, I have new dream,” Park tells her granddaughter in one of her videos.

Park, who runs a restaurant in Yongin, Gyeonggi, recently learned to use Instagram.

“These days, young people don’t really treat old people like me very well. But I have some people who come from the countryside just to see me,” said Park.

“As much as the goal of shooting these videos is to make my grandmother happy, I hope she continues to try new things with me and feels happiness,” said Kim.

Hong Sam-in started her YouTube channel in August. A mother of twins, the 55-year-old started off with cookbang, or cooking shows. She has since extended her realms to pretty much everything that would satisfy her dungdungis - a nickname she has given to her viewers.

She has tried eating dishes from a tteokbokki (rice cake and red pepper sauce) brand popular among young people and making her own version of the trendy dance called the “Shark family dance” with her husband. In one popular video, she becomes completely hooked while trying her hand at a claw machine.

Hong, who has a twin son and daughter, was given the idea of running a YouTube channel from her son.

“My husband is a priest, and I like children. So I frequently invited children over to our house to make them some nice food,” Hong said. “Seeing me cooking, my son told me to try out [a YouTube] channel, hoping to tell more people about my cooking.”

But it was not easy for Hong to stand in front of the camera, and it took her four years before she finally got the bravery to post videos to the channel.

Though she felt very awkward at first, and made lots of mistakes, she is now a pro, as she can even shoot videos without script.

“I hope to become like a mother to all my viewers,” said Hong. “Doing this, my life became revitalized, and it feels as if I returned back to my early 30s.”

One commonality of these three YouTube content creators is that they have devoted children who guided them to the world of running their own channel.

“Recording the daily routine that would have passed by without any special meaning is a great memory that brings happiness. I’m always very grateful to my son Seon-ho for helping me realize such happiness,” said Park Geun-mi.

By running the channel, the three are able to communicate a lot better with their children.

“Seeing seniors, who don’t seem to fit in, appearing in individual channels and directly and honestly expressing who they are is perceived as very refreshing to the younger generation,” said cultural critic Bae Guk-nam. “The point of contact among different generations seems to be extending.”

Hong, who could not feel more awkward in front of camera, says that “I will continue to run my channel throughout the end for my dungdungis.”

When asked to say one last comment to her fans, Grandmother Park said, “There’s nothing more for me to say than thank you. It would be nice if they can be healthy, and if they’re not yet married, getting married would also be good. That’s it.”

Broadcasters of all ages are stars on the digital screen

The youngest YouTube star is known to be 3-year-old Sin Seo-eun, while the oldest is 71-year-old Park Mak-rye. On Sin’s channel, Seoun Story, one can watch videos of the adorable toddler playing with her parents.

The reason there are so many people of diverse ages running individual channels is because of the ease in creating one. In terms of YouTube, all one needs is a Google account and a smartphone or camera for shooting.

Even without using specialized editing programs, one can simply edit videos on a phone with basic mobile apps.

According to a report by multimedia company Nasmedia, 69.7 percent of internet users in Korea watched online broadcasts last year.

Dia TV provides various services to creators, including studios and tutorials on how to make videos. Dia TV’s creators currently have 70 million subscribers as of January.

But as the competition to win over the hearts of viewers is growing fiercer, some questionable content, including pranks like “running away after hitting a stranger’s head” or nonsensical clips like “swearing battles” have become objects of public derision and criticism.

As a result, the Korea Communications Standards Commission has begun reviewing individual broadcasters’ content. Last year, the government agency reviewed 718 videos, up almost threefold from 257 in 2015.