At this 7-Eleven, you pay for stuff with your palm

At this 7-Eleven, you pay for stuff with your palm 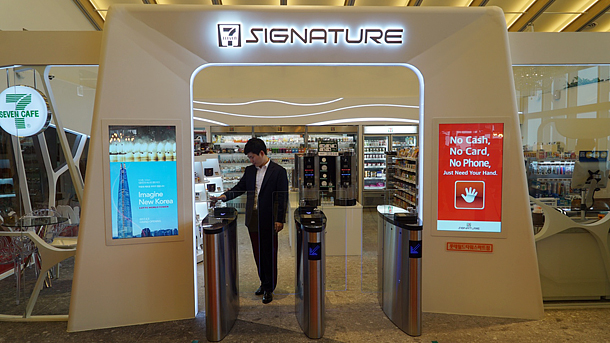 An unmanned 7-Eleven that opened on Tuesday on the 31st floor of Lotte World Tower in southeastern Seoul allows shoppers to pay with their palms instead of with cash or credit cards. [KOREA SEVEN]

All it takes is the scan of a palm to make a purchase at a 7-Eleven on the 31st floor of Lotte World Tower in southeastern Seoul.

There’s no need for cash, plastic or a smartphone.

In collaboration with Lotte Card and Lotte Data Communication, this most advanced 7-Eleven is equipped with a lot of technology - and no staff in attendance.

“It will become mandatory for future convenience stores to be equipped with smart technology to adjust steadfastly to customers’ various demands,” Jung Seung-in, CEO of Korea Seven, said Tuesday at a press event.

The core technology is called HandPay, in which customers are identified by palm scans.

An initial registration process is required with a palm scan and an inputting of credit card information. Thereafter, all the customer needs to shop is the same hand.

Data about the palm is saved separately by Lotte Card and the Korea Financial Telecommunications & Clearings Institute. But even if the data is stolen, it has no meaningful value to hackers, a Lotte Card spokesman said.

Only people registered with the HandPay system can enter a staffless 7-Eleven. A history of visitors to the store is saved on the system.

There are some 1,500 items available for purchase at the Lotte World Tower branch. Four CCTVs are installed in each corner of the store to monitor what goes on.

To conserve energy, the CCTVs only operate when there are customers inside. They are capable of reporting emergencies such as fires. The cameras also collect data on how many visitors the store gets daily and how long they shop inside the store.

A vending machine with 48 types of cigarettes is being tested. Verification of age is included in the HandPay system.

However, due to a regulation that only allows age verification for cigarette purchases through credit cards or ID cards, actual purchases are not allowed yet. Lee Jae-sung, team leader of Korea Seven PR team, said the government is expected to alter the regulation soon.

Alcohol purchases are only allowed after a staffer is summoned.

A cashier has been replaced by a machine with a 360-degree scanner. It recognizes items being purchased no matter how they are placed on a conveyor belt. Recognition is quicker if the barcode side facing up, the official explained.

In the future, the automatic point-of-sale (POS) will be equipped with artificial intelligence that recognizes an item to be purchased even without the barcode through its volume, weight and shape. Such technology will come in handy when buying vegetables and fruits, which don’t have barcodes on them.

Currently, HandPay can only be used with Lotte Card, but more cards will be added the next two months, including public transportation cards.

The 7-Eleven Signature is currently on a beta run and can only be used by staff of Lotte affiliates until the end of July.