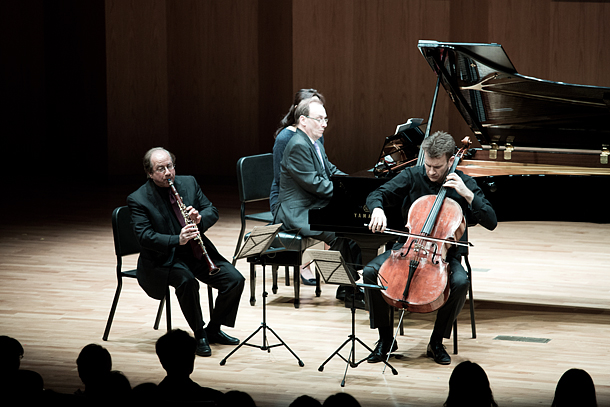 This year’s Seoul Spring Festival of Chamber Music kicked off on Tuesday and will run through May 28 at two venues in the Korean capital.[SEOUL SPRING FESTIVAL OF CHAMBER MUSIC]

Every spring, the city of Seoul hosts an eclectic array of concerts that aims to break the stereotype of classical music as an old and stuffy genre.

One of those events is the Seoul Spring Festival of Chamber Music, which is now in its 12th year. The festival kicked off on Tuesday and runs through May 28 at two venues, the Sejong Center for the Performing Arts in central Seoul and the Seoul Arts Center in the southern part of the capital.

The festival’s goal is accessibility, to make classical music affordable and appealing to a wide audience. Chamber music in particular can seem stale because performances usually involve a small duet, trio or quartet of instruments.

That’s why the festival’s organizers have injected some diversity into the performances. On Saturday, Karol Beffa, a pianist and film score composer, will improvise a soundtrack on stage for Charlie Chaplin’s 1917 silent short “The Immigrant.” On Sunday, he’ll give another performance timed to F.W. Murnau’s 1927 classic “Sunrise.”

And during the festival’s concert geared toward families on Saturday, there will be a unique collaboration between cellist Ophelie Gaillard and hip-hop dancer Ibrahim Sissoko.

Tickets to the 15 concerts held over the two-week festival are relatively affordable and cost no more than 60,000 won ($54). Tickets to the family concert are just 20,000 won.

Still, festivalgoers can expect a lot of bang for their buck. The shows feature world-renowned performers including pianists Julius-Jeongwon Kim and Mun Ji-yeong; violinists Cho-Liang Lin and Bomsori Kim; and cellists Edward Arron and Moon Woong-whee.

Only the special brunch concert held on Saturday at the hanok (traditional Korean home) of former President Yun Posun, a venue often used for special occasions, is priced at a premium range: 150,000 won for one of few limited seats.

Normally, the performance is held outdoors in the home’s garden, but this year, the concert has been moved to the adjacent Andong Church because of its better acoustics. The brunch itself will still take place in the garden.

Korean violinist Kang Dong-suk, director of the festival, is proud to be organizing the event for a 12th year.

“I’m beginning to witness similar chamber music festivals getting organized here and there in Korea,” Kang told JoongAng Sunday, an affiliate of the Korea JoongAng Daily. “The public now seems to have a better understanding toward chamber music.”