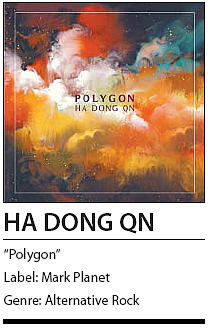 Singer-songwriter Ha Dong Qn, also known as Ha Dong-kyun, returns from his three-year hiatus with a brand new sounds. Originally an R&B artist, Ha’s style has evolved and is now dominated by a more rock-influenced sound. The songs may have changed, but the themes and tone of his music remains unchanged. A calming folk guitar starts off the album in “Beautiful Things.” Instrumental interludes are kept at a minimum to highlight the singer’s voice. A burst of emotion hits at the climax of the opening track, setting a tone for the album.

In the title track, Ha asks himself where he is in the world and if he were any different in his previous relationship. His drooping voice adds sorrow to the song, and loneliness is emphasized by the harmonic female vocal later in the song.

The final song on the EP, “Lucid Dream,” is majestic in its buildup. The repetitive screaming of the lyric “When I dive” in the chorus, which coincidentally sounds like “When I die,” makes the song sound as if it is the soundtrack of hell in a blockbuster movie - with a pounding melody that helps create a majestic feel.