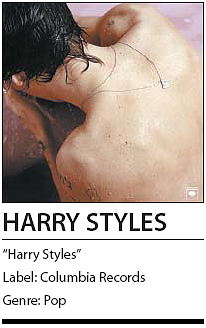 When listening to Harry Styles’ solo debut, it will be hard to not think of David Bowie, Mick Jagger, Elton John and other rock icons who came decades before the former boy bander.

The good thing for Styles, 23, is some of his fans might be too young to recognize the Rock and Roll Hall of Famers. But despite looking to the past for his sound apart from One Direction, Styles proves he’s worth checking out.

The 10-track album is a solid set that proves Styles has some direction: “Two Ghosts” is probably his strongest song; “Only Angel” and “Kiwi” is full of Jagger swagger; and first single and Top 5 hit, “Sign of the Times,” is dreamy and melodic.

Much of the credit belongs to Grammy-winning super producer Jeff Bhasker, whose drum-filled sound has aided everyone from Kanye West and Jay Z to Bruno Mars and fun. Bhasker works his magic throughout “Harry Styles” alongside producers Tyler Johnson and Alex Salibian; they all share writing credit with Styles on most of the tracks, giving off a rock band vibe instead of a solo one.