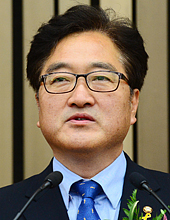 The ruling Democratic Party elected three-term lawmaker Woo Won-sik as party floor leader on Tuesday, a significant role as the DP regained its governing party status for the first time in nine years with the May 9 election.

Woo will be given the task of helping the nascent Moon Jae-in government push through policy agendas it campaigned on by reaching out to opposition parties.

In an intraparty vote held at the National Assembly, Woo received 61 votes, defeating fellow party lawmaker Hong Young-pyo, who got 54 votes. Of 120 DP lawmakers, 115 participated in the vote.

Knowing the importance of bipartisan cooperation, especially from the People’s Party, which has 40 lawmakers, Hong emphasized that the two parties shared many values. “I will start working to push those joint campaign promises through [the Assembly],” said the new floor leader.

“The People’s Party and the DP have the same roots,” Woo said, referring to a defection by former DP lawmakers in late 2015 and early 2016 to join the People’s Party, which was co-founded by Ahn Cheol-soo and Chun Jung-bae, both former DP members, as they were unhappy with the way the DP was led by Moon, then its leader.

The current Assembly landscape requires the ruling DP to reach out to the People’s Party, Bareun Party and minor progressive Justice Party in order to see much of Moon’s campaign pledges realized in the first months of his presidency.

The Advanced National Assembly Act requires consent from 180 lawmakers out of the 300-member chamber to put a contested bill to the floor for a vote. Considering the DP has 120 lawmakers, it needs consent from both the People’s Party and Bareun Party, which has 20 lawmakers under its wing. Should the DP acquire 100 percent bipartisan cooperation from the two, it can override objections from the conservative opposition Liberty Korea Party (LKP), which has 107 lawmakers.

Woo’s first test of political skill as the DP’s No.2 will be in the coming days as the Assembly awaits confirmation hearings for Prime Minister Nominee Lee Nak-yon on May 24 and 25. The Moon administration and the DP do not expect much opposition.

A series of other confirmation hearings await the Assembly as Moon is expected to name new cabinet members once nominee Lee, former South Jeolla governor, formally takes office. One of the key tasks Woo faces in his early days of his party leadership will be to ensure a smooth confirmation process for cabinet nominees.

On Monday, DP Chairwoman Choo Mi-ae carried out a sweeping personnel reshuffle within the party leadership to signal her resolve to work closely with Moon. Of the DP’s 20 high-level positions, 18 were replaced with Choo’s picks.

For the position of secretary general, three-term lawmaker Lee Choon-suak got the job. Lee, who represents a district in Iksan, North Jeolla, is known for his fervent support of Moon. Kim Tae-nyeon, a three-term pro-Moon lawmaker, was picked as the chief policymaker of the party. With its line of pro-Moon figures, the DP has made clear its intention to work with the new administration.