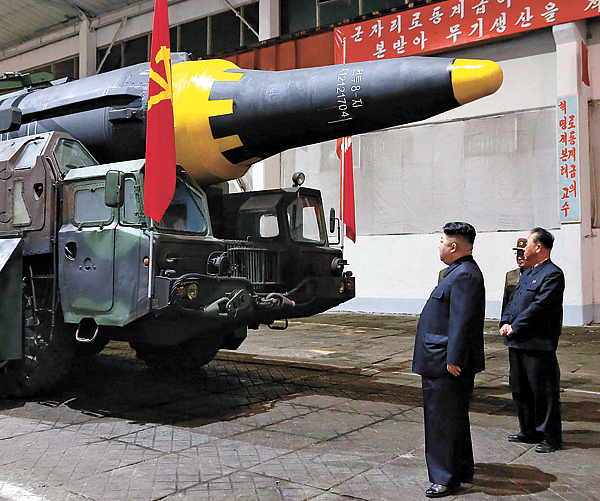 The statement urged nations to “fully implement all measures imposed” on North Korea by the Security Council “in an expeditious and serious manner,” especially the sanctions set out in the UNSC resolutions 2270 and 2321 last year after the regime’s fourth and fifth nuclear tests.

It said the council will “take further significant measures including sanctions” and called upon Pyongyang to show “sincere commitment to denuclearization through concrete action.”

As he chaired a meeting on North Korea at the Security Council on April 28, U.S. Secretary of State Rex Tillerson called for “a new approach” and “increased diplomatic and economic pressures” on North Korea.

He called on countries to suspend or downgrade diplomatic relations with North Korea and increase the regime’s financial isolation by levying new sanctions on North Korean entities and individuals supporting its weapons and missile programs, and to tighten those already in place. He also said Washington will not hesitate to sanction third-country entities and individuals supporting the regime’s illegal activities.

South Korea’s Ministry of Foreign Affairs on Tuesday lauded the adoption of a “quick and stern” joint statement by the members of the UN Security Council, including China and Russia, against Pyongyang’s latest ballistic missile launch, which came days after South Korea’s election of President Moon Jae-in on May 9.

“Including the countries that our government will be sending special envoys to - the United States, China, Japan, Russia, Germany and the European Union - 22 nations and four international organizations have expressed opposition or strong condemnation to this latest provocation,” said Cho June-hyuck, spokesman of the ministry said in a briefing. “The international community sending out condemnatory messages so quickly reflects disappointment at North Korea for carrying out such reckless provocations at a time when the new South Korean government launched just several days ago.”

Cho added that upon the request of South Korea, the United States and Japan, the Security Council agreed to convene an emergency session Tuesday in New York to discuss North Korea’s ballistic missile test.

North Korea’s latest missile was fired Sunday morning from the northwest city of Kusong, in North Pyongan Province, and flew about 700 kilometers (435 miles) before landing in the East Sea, near Russian territory.

This comes as the first such provocation by the North since the new administration launched in Seoul last week.

The South’s Ministry of National Defense confirmed that North Korea continues to maintain its ability to conduct a sixth nuclear test at any time at its Punggye-ri test site in Kilju County, North Hamgyong Province. Seoul officials have warned for weeks that Pyongyang is able to do so upon the order of the regime’s leader, Kim Jong-un.

“The U.S. military confirmed that the X-band radar deployed in Seongju detected [North Korea’s missile],” the defense chief said, emphasizing the necessity of the antimissile system that has been placed in a golf course in Seongju County, North Gyeongsang, last month. He added that the radar had a detection range of between 600 to 800 kilometers, but was that he not sure at what distance the North’s missile was detected, according the to the U.S. military report.

He confirmed that the Thaad battery, deployed in Seongju by the U.S. Forces Korea, has been operational since May 1.

He added that the Defense Ministry was able to confirm the North’s missile launch Sunday two minutes after it was fired at around 5:29 a.m. from a South Korean Navy Aegis-equipped DDG-992 destroyer.

The Blue House said that Seoul and Washington agreed to work together to deter the North’s provocations, following a meeting between Seoul’s foreign affairs and security officials and U.S. National Security Council’s senior director for East Asia, Matt Pottinger, and director for Korea, Allison Hooker.

Yoon Young-chan, President Moon’s top press secretary, said that the two sides reconfirmed the goal of complete denuclearization of Pyongyang, the need for “all methods including sanctions and dialogue” to achieve this, that dialogue with North Korea is possible under the right circumstances, and that there is a need for Seoul and Washington to come up with a “resolute and pragmatic” plan for this end.

Pottinger told reporters after talks at the Foreign Ministry, “South Korea and the United States are in alignment that North Korea’s behavior is a threat to regional stability and to the security of the region; and we want to make sure that only under the right conditions some kind of talk takes place.” He continued, “We’ll know them when we see them, but right now we certainly do not see the right conditions in light of the provocations,” adding, “we would like to see concrete movement to reduce the threat.”

Amid ensuing military tension in the region, U.S. Navy’s Carl Vinson Strike Group is staying near the Korean Peninsula on an open-ended mission, confirmed a South Korean naval official Tuesday.

A Navy official said in briefing at the Ministry of National Defense, “Following the deployment of the Carl Vinson strike group last month, it has been taking part in joint drills between Korea and the United States, and the date to end the drills has not been decided.”

The U.S. aircraft carrier arrived in the region last month as a show of force and has been conducting joint drills with South Korea since April 29. It is rare for U.S. strike groups to stay in the region for more than a week or two.