With new leaders, the PP carves out its own path

With new leaders, the PP carves out its own path 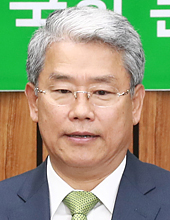 Four-term lawmaker Kim Dong-cheol was elected floor leader of the People’s Party on Tuesday, a week after its devastating defeat in the May 9 presidential election.

With his victory, Kim will have to set the tone of possible policy cooperation with the ruling Democratic Party as well as with the Moon Jae-in government.

On a ticket with Kim, first term lawmaker Lee Yong-ho was elected chief policy maker. The duo won the intraparty vote by defeating Kim Kwan-young, who ran with Lee Un-ju on the ticket in a runoff. The party stopped counting votes after the Kim-Lee duo was confirmed to have won a majority of votes.

As the floor leader of the party of 40 lawmakers, Kim will serve as the acting party leader and will have to appoint the head of the party’s emergency council and its members to recover the party from the electoral defeat. “The Moon administration appears to be preoccupied with showcasing before the public,” said the veteran lawmaker. He went on to criticize President Moon’s decision the day before to temporarily shut down thermal power plants that have been running 30 years or more for a period until June, citing the lack of policy consultation beforehand.

“While we need countermeasures on the fine dust problem, I am not convinced whether it is the right move to address the issue that would increase the burden to the people by increasing electricity bills,” continued the floor leader, referring to a forecast that the temporary shutdown would lead to a 0.2 percent increase in electricity bill. The Blue House said the increase could be covered by the tax-funded Korea Electric Power Corporation.

“It would have been much better had the government consulted with the opposition and gained public consent,” added Kim.

On a possible coalition with the ruling DP, Kim said official terms of coalition deal will be required. He made it clear that without a formal agreement, no coalition would be possible.

“If the Blue House tried to appoint some of our party members for cabinet positions (without an official coalition agreement), that would just be an attempt to disrupt our party unity,” he remarked.

He also dismissed the possibility of merging with the center-right Bareun Party, which has 20 lawmakers under its wing. Talks have circulated that the two opposition parties might merge to forge a 60-member party, which would give it a considerable negotiating power with the DP and the Moon government.

The Bareun Party on Tuesday also made clear it would not merge forces with the People’s Party but instead go on its way to represent the conservatives.

“Under any difficult circumstances, our party will pave the way forward as reform-minded conservatives only looking for the sake of the people,” said 100 party members and lawmakers in a statement issued Tuesday.