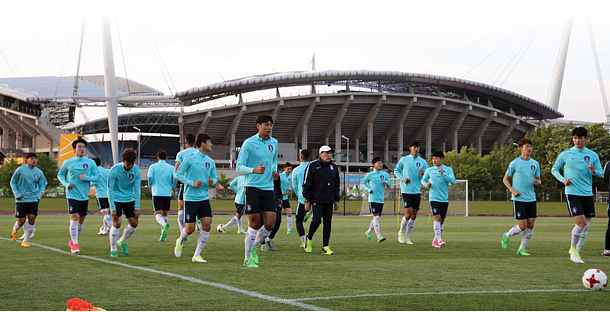 Members of South Korea’s squad for the FIFA U-20 World Cup warm up in an auxiliary field next to Jeonju World Cup Stadium on Tuesday. [YONHAP]

The FIFA U-20 World Cup will kick off on Saturday, with South Korea hoping to deliver their best performance to date at home.

Under the slogan “Trigger the Fever,” the U-20 World Cup will be played until June 11 in six local cities - Cheonan, Daejeon, Incheon, Jeonju, Suwon and Jeju. South Korea was named the host of the 2017 U-20 World Cup in 2013 after edging out Azerbaijan in a vote during a FIFA Executive Committee meeting.

The U-20 World Cup is the fourth FIFA-sanctioned competition that South Korea will stage, after the 2001 Confederations Cup; the 2002 World Cup, which it co-hosted with Japan; and the 2007 U-17 World Cup. South Korea is the third country to host all four FIFA events, after Japan and Mexico.

The 2017 tournament is also the 21st edition of the U-20 World Cup, and it’s the sixth time that the premier youth football tournament is taking place in an Asian country. 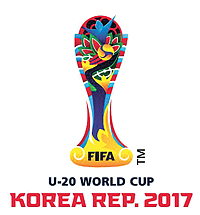 Twenty-four participants were divided into six groups of four teams at a draw on March 15. The top two teams from each group, along with four best third-place finishers, will enter the knockout stage. South Korea have been paired with six-time champions Argentina, European giants England, and African side Guinea in Group A. Group B features Germany, Mexico, Venezuela and Vanuatu.

Portugal, two-time tournament winners, have been placed in Group C, along with Costa Rica, Zambia and Iran. Uruguay, who won the South American qualification, joined Japan, Italy and South Africa for Group D.

Group E consists of the 2013 U-20 World Cup champions France, New Zealand, Honduras and Vietnam. The United States, who topped the qualification round in its region, are in Group F and will face Senegal, Saudi Arabia and Ecuador.

The organizers, led by Korea Football Association President Chung Mong-gyu, said they’re ready to welcome the participants with some 1,300 volunteers lined up to help operations. Some of them already got some experience when South Korea staged a test event in three cities in March.

The organizers have been working hard to promote the U-20 World Cup as they hope South Koreans fill the seats for other national team matches. Since the biennial men’s youth football championship was expanded to the 24-team format in 1997, the 2011 edition in Colombia had the highest average attendance with 25,191, while the 2013 U-20 World Cup in Turkey had the lowest average attendance with 5,821.

South Korea’s best finish came in 1983, when they finish fourth in Mexico. In their latest appearance in 2013, South Korea ended up quarterfinalists.

The young Taeguk Warriors had a bumpy road last year, as they got eliminated in the group stage of the Asian Football Confederation U-19 Championship, forcing the departure of head coach An Ik-soo.

Just six months away from the tournament, South Korea appointed Shin Tae-yong, who led the national team at the Rio de Janeiro Olympics, to be their skipper for the U-20 side. Shin went on to check on 48 players before confirming his final 21-man squad for the World Cup last month.

Shin’s side has scored 12 goals in six matches and half of them came from FC Barcelona prospects Paik Seung-ho and Lee Seung-woo, who have each scored three goals apiece. Defense, however, seems to be a problem for South Korea, as the team has conceded eight goals in six matches.

South Korea will open the tournament against Guinea on Saturday in Jeonju and will face Argentina three days later at the same venue. They will then take on England on May 26 for their final group match in Suwon, Gyeonggi Province, some 45 kilometers south of Seoul.

South Korea boast better head-to-head records against Argentina and England at the U-20 level.

They’ve earned three wins, three draws and one loss against Argentina and two wins and one draw against England. South Korea have never faced Guinea in U-20 football.

Shin said he wants to the team to reach at least the quarterfinals, while the players said they want the trophy. No Asian team has won the U-20 World Cup since its inception in 1977.

“We don’t want to disappoint our home fans,” Shin said at a media day event on Monday. “We’re confident and we believe that we can show our best performance at the World Cup.”