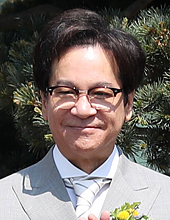 The head of food and entertainment giant CJ Group pledged Wednesday to bolster efforts toward growth as he declared his return to management after a four-year absence.

“Due to my absence, there has been a lapse in securing future growth drivers for the group, and a setback in the global unit, at a time when there should’ve been a significant leap forward... I feel heartbroken and deeply responsible,” CJ Group Chairman Lee Jae-hyun said at a key annual company event in Suwon, south of Seoul.

Lee made his first public appearance as the group’s chief since 2013 as he was serving a two and a half year sentence after the prosecution indicted him on embezzlement and tax evasion charges that year. He was released last August on a special presidential pardon granted by former President Park Geun-hye.

The 57-year-old, who suffers from a genetic disease, appeared in a wheelchair but stood at a podium to make a speech, aimed at arousing inspiration from the 300 employees present.

Lee expressed eagerness to take charge of the empire, stressing that he will “spare no efforts to bring the incomplete businesses back on track and secure fresh drivers for growth in future.”

CJ Group plans to spend a total of 36 trillion won ($32.1 billion) for its logistics, biotechnology and cultural content businesses by 2020, including 5 trillion won set for this year, according to the company.

Founded in 1953, CJ started off as a food materials unit of Samsung until it went its own way in 1990s. It is now the 15th-largest family-run conglomerate with 70 affiliates under its wing and 27.8 trillion won in assets as of 2016. Its key businesses comprise food production, media and entertainment, biotechnology and logistics.