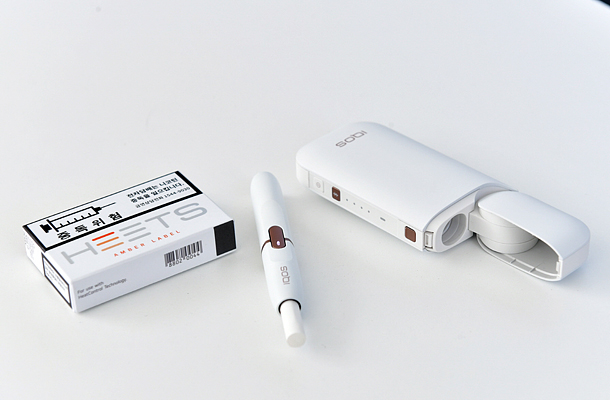 Philip Morris will begin selling its IQOS electronic cigarette in Korea next month. From left, a pack of tobacco sticks marketed as HEETS, the device that heats the tobacco stick and the device’s charger. [PHILIP MORRIS KOREA]

Philip Morris International on Wednesday introduced its IQOS electronic cigarette to the Korean market, where the product has generated hype among local smokers as an alternative to tobacco-burning cigarettes.

Often called the “iPhone of cigarettes” because of its sleek design, the IQOS electronic cigarette heats up tobacco leaves rather than burning them and generates nicotine-infused vapor instead of smoke. The manufacturer claims this is less harmful than traditional cigarettes and mimics the taste of burnt tobacco better than conventional liquid-based electronic cigarettes.

“Today is a revolutionary day in Korea’s tobacco industry,” said Chong Il-woo, CEO of Philip Morris Korea, during a press event in Seoul on Wednesday. “We dream of a completely smoke-free society where IQOS will be able to replace all traditional cigarettes.”

According to Philip Morris, IQOS produces 90 percent fewer toxic or potentially toxic substances than from burning tobacco. The device maintains a temperature of 350 degrees Celsius (662 degrees Fahrenheit), far less than the 600 to 800 degrees Celsius required to burn tobacco. The company says 80 percent of the vapor produced by the cigarette is water.

“It is not risk-free,” said Moira Gilchrist, director of scientific engagement at Philip Morris. “The best thing is to stop using tobacco products altogether. We believe that IQOS is a better choice for those who cannot stop smoking.”

Since the electronic cigarette produces no smoke, it could appeal to smokers wary of the lingering smell that traditional cigarettes leave on clothing and skin, the company said.

IQOS is currently available in 25 countries and used by an estimated two million people. In neighboring Japan, IQOS makes up 8.8 percent of the entire cigarette market as of April, and demand for it is rising. When the product was first released there last April, it held just 1.6 percent market share.

“Without the nicotine, it cannot become a substitute for traditional cigarettes,” CEO Chong said. “The gist is that we deliver the least amount of harmful chemicals like cancer-causing substances in the IQOS.”

The IQOS kit includes a stick-shaped heater and charger that together retails for 120,000 won, though discounts are available. The tobacco stick that the device heats comes in four flavors, and a pack of 20 sticks costs 4,300 won.

The product will go on sale in Seoul starting June 5 at 2,000 CU convenience stores and a select number of Shinsegae Electro Mart locations. Preorders can be made at two IQOS stores in Gwanghwamun, central Seoul, and Garosu-gil, southern Seoul, starting May 27. The company is planning to expand to other parts of Korea in the latter half of this year.

The launch of IQOS in Korea jolted local cigarette manufacturers. Until now, liquid-based electronic cigarettes have mostly been the realm of small and midsize companies. They remain a blue ocean for big producers.

“We are closely monitoring the market and considering launching an e-cigarette product,” a spokesperson from the company said.

British American Tobacco Korea plans to bring its electronic cigarette, Glo, which is similar to IQOS in that the device heats tobacco, to the local market between July and September this year. So far, Glo is only sold in Sendai, Japan.