Documentary on Roh focuses on primary

Documentary on Roh focuses on primary 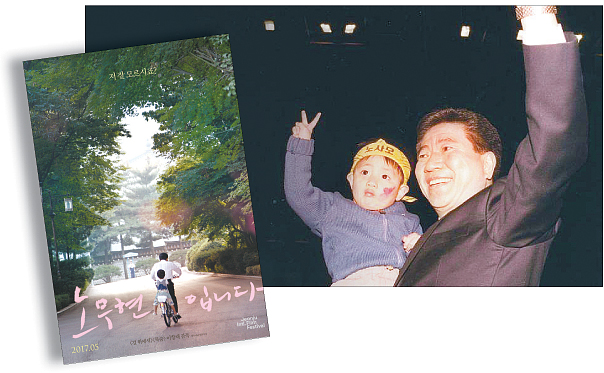 “Our President” is a new documentary about late President Roh Moo-hyun, which will open in theaters on May 25. [CGV ARTHOUSE]

“Our President,” a new documentary about the life of the late President Roh Moo-hyun, will open next week.

Seven months ago, the first documentary on the late president, “Moo-hyun, the Story of Two Cities,” opened in theaters.

While “Moo-hyun, the Story of Two Cities” sheds light on the values Roh represented as he ran for the National Assembly to represent Buk and Gangseo Districts in Busan in 2000 - an election in which he was defeated - the upcoming documentary focuses on the miracle of Roh winning the primary of the Millennium Democratic Party in 2002, when he unexpectedly defeated frontrunner Rhee In-je.

The filmmakers were careful not to reveal anything about the project when they first came up with the idea to make a documentary on Roh four years go.

“There are two reasons we could not reveal the film’s production,” said producer Choe Nak-yong during a press preview held in Seongdong District, eastern Seoul, Tuesday.

“First, if we had made the news public, we believed some kinds of obstacles might surface that would prevent us from producing the film.

Choe continued, “In terms of the movie’s source material, we had to rely a lot on past records. If somebody tried to block the production, we believed it might have been in blocking us from getting hold of footage. It was only after we were certain of securing the footage that we were able to publicize the documentary’s production.”

The producer added that the core target audience of the movie is people in their teens and early 20s who don’t know the history of Roh or his era - and may not know of a more idealistic time than now, when a president has been impeached and removed. “Our feelings of shame and embarrassment [about the tawdry contemporary political scene] is what triggered us to start on the movie.”

The producer said that if young people could learn about a politician who attempted to change the world more than a decade ago, older generations would feel less embarrassed about where the country ended up.

Director Lee Chang-jae (“Between”) said at the press event that he was not a big fan of Roh’s.

“I had never supported [Roh] until the end of his term. I was against the free trade agreement [with the U.S., which the Roh government agreed to in June 2007].”

But the filmmaker said that he felt a deep sorrow after Roh committed suicide in May 2009 by jumping from a cliff in his hometown of Bongha Village in Gimhae, South Gyeongsang.

“I now am sure of what I like and dislike about him. I think he was a very good man. For me, he was more of an ordinary person than a politician,” Lee said. “He is a person who tried to become a man before being a politician.”

As there were many difficulties in completing the documentary, the director added that during production it felt “highly unrealistic” for the film to come out in theaters.

The documentary includes historical footage and interviews with Roh’s followers, including newly-elected President Moon Jae-in, who served as Roh’s senior presidential secretary for civil affairs, and An Hee-jung, a liberal politician who was Moon’s primary rival.