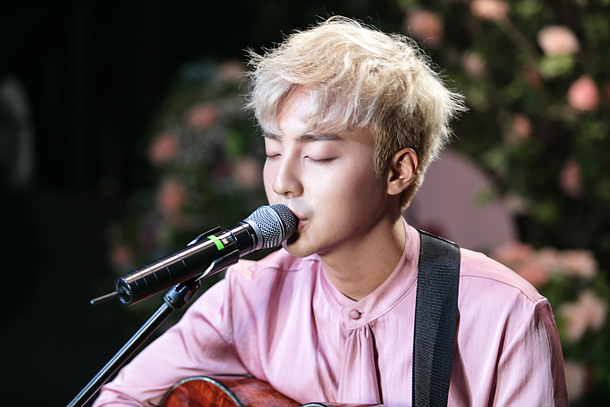 Singer songwriter Roy Kim gives a performance of his lead single “Suddenly” in an album showcase for his mini-album “Blossom” at Yes24 MUV Hall, Mapo District, western Seoul, on Tuesday. The artist claimed he wanted to shake off the expectations and stereotypes the public have about him through this project. [FORTUNE ENTERTAINMENT]

Artists who have turned 24 this year have been going strong on the music charts. IU’s album “Palette” touches on the artist going through the motions as a 24-year-old. Indie band Hyukoh, consisting of four members born in 1993, released their album “23” featuring songs about the confusions faced by many in their mid-twenties. Both artists saw strong sales with their honest depictions of their transition into adulthood.

Singer-songwriter Roy Kim, who also recently turned 24, chose to talk about growth and change in his new album “Blossom.” At the album showcase for his mini-album held at Yes24 MUV Hall in Mapo District, western Seoul, on Tuesday, the young artist who emerged from audition program “Superstar K,” blossomed into a true artist with an honest work full of love and heartbreak.

“I was really nervous but now I’m relieved that it’s finally getting released,” said the singer who, with his hair newly bleached, greeted reporters on a small stage at the theater hall. “Everyone worked really hard, from the staff to the producers.”

The singer-songwriter has been synonymous with spring ever since he released “Bom Bom Bom,” which translates to “Spring Spring Spring,” in 2013. Although the artist previously said the upcoming album wouldn’t be related to the season, the title suggests anything but that, with album name and cover featuring floral motifs. 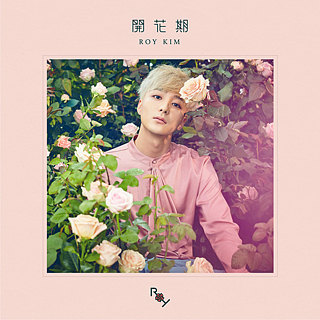 The album cover art for the mini-album “Blossom.” [FORTUNE ENTERTAINMENT]

The singer said that his breakout hit is very special to him. “The reception I got for the song was unexpected. I believe I won’t be able to ever replicate the success I had with that song.”

The singer said he wanted to distance himself from his pervious success and the style he had, which in turn was the creative initiative for this project.

“People have a certain expectation or a stereotype of what Roy Kim as an artist can do or cannot do in terms of musical style. I wanted to get out of that box through this album.”

Kim said the process of change was very tough. “It took about four months to find the right producers and the arrangers that could bring about the change I was going for.”

The process of creating the album was a big change from his previous endeavors as well. Roy Kim is famous for having composed and written all of his previous songs. In this album, however, he worked together with other producers.

“I have always been receiving music from producers, but never had a song that really struck me. This time I wanted to do a somewhat trendy song - which is a type of song that I can’t really write. I received a song that really clicked with me from S.M. Entertainment’s foreign producer, Gustav Karlstrom.”

The song in question is the single “Egoist,” which shows the selfish side of Kim during love. He claims he doesn’t want to be troubled by clingy women, but doesn’t want to be ignored either. On “Suddenly,” he shows the arrogant side of his love: attempting to look and sound cool in an breakup, but ultimately wanting to re-kindle the relationship.

“If ‘Bom Bom Bom’ was saying, ‘Be with me, stay with me,’ ‘Suddenly’ attempts to portray a much more meandering emotion. I believe everyone can relate to that.”

On Tuesday, the artist said he wished his songs would reach the top ten on the music charts, but said, “Realistically I think it will be lower than that because [the charts] are kind of like a jammed highway [due to so many big artists]. I even delayed my album release because IU announced she will release an album, but then PSY dropped his album just when I was gearing up to release mine.”

However, Kim didn’t need to worry too much as the two title tracks came in at first on domestic music charts Genie, Olleh Music and Bugs.