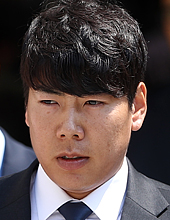 Beleaguered major league infielder Kang Jung-ho on Thursday lost his appeal for an earlier drunk driving sentence, a development that puts his playing career in jeopardy.

The Seoul Central District Court rejected Kang’s appeal and upheld an eight-month sentence from March, which was suspended for two years, for leaving the scene of a drunk driving accident in Seoul last December.

The decision casts Kang’s future in the big leagues into further doubt. The 30-year-old remains without a work permit to play for the Pittsburgh Pirates.

He’d filed for the visa prior to the initial court ruling in March but his application was rejected by the U.S. Embassy here.

The DUI arrest in December was Kang’s third in South Korea, after August 2009 and May 2011. His driver’s license has since been revoked under the three strikes law.

The suspended jail term means Kang will avoid actual prison time if he stays out of trouble over the next two years, but he quickly decided to appeal the ruling, hoping that the court would reduce the punishment to a fine and open the door for him to re-apply for the U.S. visa.

Prosecutors had initially recommended a court fine but the court handed down the suspended sentence, citing the gravity of the situation.

In appealing his case to the court last month, Kang said while he acknowledged his wrongdoing, not being able to play in the majors because of the visa issue would be “akin to a death sentence” to him.

Explaining its decision, the court made a reference to the video review system in baseball, where the original call on the field stands unless there is clear and convincing evidence to overturn it.

“Considering all circumstances, we don’t believe the original sentencing was outside reasonable limits,” the decision read. “All extenuating circumstances were reflected in that ruling.”