Son and clubmates will visit the South

Son and clubmates will visit the South 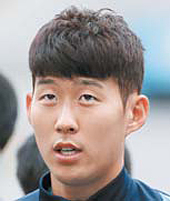 This is the first time since 2005 that Tottenham players will visit South Korea. Twelve years ago, the London-based club landed in South Korea to play an invitational club tournament that also featured Olympique Lyonnais, PSV Eindhoven and Real Sociedad.

Following their South Korea visit, Son and his Tottenham teammates will fly to Hong Kong to play a friendly match with Kitchee SC on May 26.

Tottenham has confirmed a second-place finish in the EPL after their 2-1 win over Manchester United on Sunday. They will play Leicester City Thursday before ending their EPL campaign with Hull City on Sunday.

Son, who won the EPL Player of the Month award for April, is on the verge of setting a single-season scoring record by a South Korean in Europe. He has so far scored 19 goals in all competitions this season, matching Cha Bum-kun’s tally in the 1985-86 season with Leverkusen.

The 24-year-old forward, who joined Tottenham from Leverkusen in 2015, has 12 goals in the EPL, in addition to six goals in the English Football Association (FA) Cup and one goal in the UEFA Champions League this season.