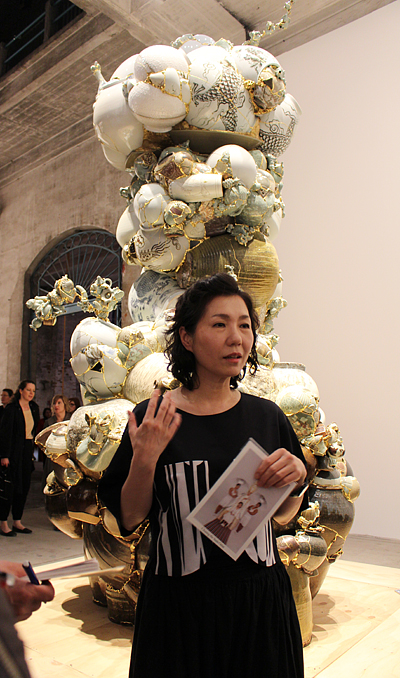 Korean artist Yeesookyung talks about her new work “Nine Dragons in Wonderland” in front of the giant piece at the main International Exhibition of the 57th Venice Biennale in Arsenale, Venice, last week. [MOON SO-YOUNG]

The 2015 show was called “All the World’s Futures” and focused on political and social issues without much interest in visual impact. 2017’s “Viva Arte Viva” is “a Biennale designed with artists, by artists and for artists, about the forms they propose, the questions they ask, the practices they develop and the ways of life they choose,” as director Christine Macel said in a statement.

Among the visually-striking artworks that lure viewers to them is Korean artist Yeesookyung’s “Nine Dragons in Wonderland,” a five-meter-high (16.4-feet-high) sculpture constructed with fragments of broken traditional ceramics.

For this work, shards from many types of pottery - including blue and white ware, the celadon favored by aristocrats, black-glazed ceramics and earthenware used by commoners in old Korea - are put together to make a rhythmic and organic outline. The sculpture looks like a living hybrid duplicating itself. 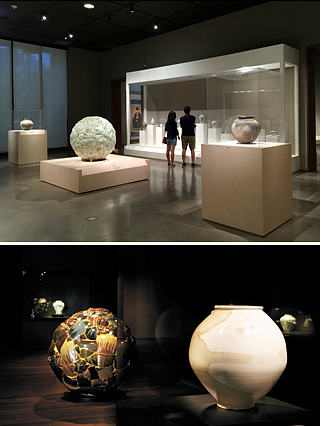 Yee’s works are on view at major museums such as the LACMA in Los Angeles, top, and Leeum, Samsung Museum of Art in Seoul, above, along with Korean porcelains from the Joseon dynasty. [MOON SO-YOUNG, JOONGANG ILBO]

“I have visited more than 20 ceramics workshops across [Korea] to collect the fragments of ceramics,” the artist, 54, told a group of reporters in Arsenale, Venice, one of the two venues for the Venice Biennale, on May 11.

The gigantic work is the latest of Yee’s “Translated Vases” series, which she started in 2001.

“I was inspired by a documentary film that showed Korean contemporary artisans trying to perfectly re-produce Joseon-era (1392-1910) white porcelains and destroying the finished vessels they thought were imperfect,” Yee said. It is a time-honored tradition for Korean potters to destroy many of their works as they come out of the kiln, keeping only the most perfect.

“Before seeing the documentary, I’d been interested in ‘translation’ of culture,” she continued. “I once asked foreign artisans to re-create Joseon porcelains in the way they thought - a kind of translation. And seeing contemporary masters destroy their own ceramics, I thought it was a kind of struggle for a ‘perfect translation,’ in other words, for perfect re-creation of Joseon white porcelains.

“But is a perfect translation possible?” the artist asked. “I decided to collect the pieces of the ceramics destroyed by the master artisans and to make my own translation of traditional ceramics.”

When Yee creates a “Translated Vase,” she intuitively puts together the pieces of broken ceramics she has collected and then carefully fills the seams with 24-karat gold leaf. The initial flaws - the traces of patches of the ceramics pieces thrown away by its creators - turn into gorgeous details of the works with unique aesthetic effects.

Pieces from her “Translated Vase” series are in major museums such as the British Museum in London, the Los Angeles County Museum of Art (LACMA) in Los Angeles and Leeum, Samsung Museum of Art in Seoul. Many call the works a “re-interpretation of traditional art.” 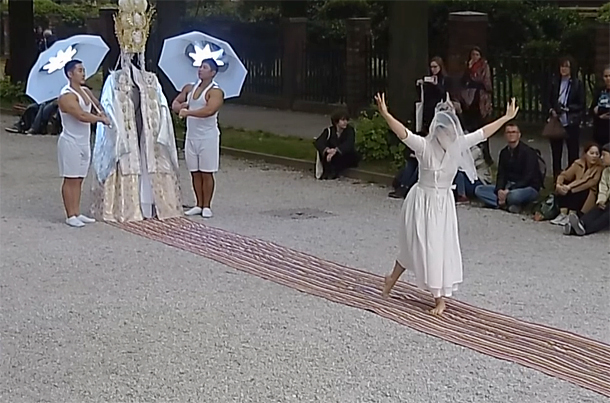 A scene from the performance “Chasing the Sun’s Orbit” directed by Yeesookyung, which took place at the Giuseppe Garibaldi Avenue as part of the 57th Venice Biennale in Venice on May 11. [LA BIENNALE DI VENEZIA CHANNEL]

But Yee said she feels uneasy, when she hears that.

“I don’t think my works are ‘re-interpretations’ of traditional art, although I’m again in the “Pavilion of Traditions” section of this biennale,” she said. “It is because I never know what is the tradition exactly. It is a mysterious and vague thing to me. My works are some kind of mutants or hybrids just like the nine sons of the Dragon King in the Chinese mythology. The sons are not pure dragons but hybrids with other animals. That’s why my latest work has such a title.”

For this biennale, Yee also showed a performance she directed at the Giuseppe Garibaldi Avenue in Venice on May 11. “Chasing the Sun’s Orbit” is also a kind of beautiful hybrid based on Korean traditional music and dance.