New head of FTC to put chaebol on shorter leash

New head of FTC to put chaebol on shorter leash 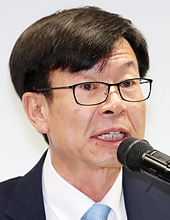 “The top four conglomerates account for two thirds of the assets of the top 30 business groups in the country and therefore it would be more effective and sustainable to narrow the target to the four conglomerates,” Kim Sang-jo said on Thursday. “However, this does not mean that we will create regulations specifically targeting these four [business] groups. What I mean is that we will apply stricter standards on issues regarding the four groups within the boundaries of existing laws.”

Although Kim didn’t name the four conglomerates, it was assumed he was referring to Samsung, Hyundai Motor Group, SK and either LG or Lotte.

“One of the reasons past administrations failed to reform the [family-controlled] conglomerates was because unilateral regulations were applied on all businesses and therefore, while they had little or no effects on the top conglomerates, these regulations were considered excessive by smaller companies,” Kim said. He said the regulations should be applied differently according to the goal, the subject and the means of oversight.

Kim, a professor at Hansung University who has been nicknamed “Conglomerate sniper” and “Samsung’s grim reaper” for his criticisms of chaebol while working in civic groups, was appointed to be the first FTC commissioner under the Moon Jae-in administration.

On Thursday, Kim reaffirmed his intention of reopening a special department that will handle cases related to conglomerates.

The department, which was first created by the Kim Dae-jung administration, was shut down in 2005 after it was accused of excessive zeal in restricting business activities.

Kim said his agency won’t be giving free passes to small and midsize companies and that he’s not out to dismantle the conglomerates.

“In 20 years working for civic groups, I have not once argued for the dismantling of conglomerates,” Kim said.

Kim stressed that his goal is to find reforms that are rational and sustainable in a business environment that has been formed since the global financial meltdown of 2008.

“Chaebol reform is a process in achieving the ultimate goal,” Kim said. “The ultimate goal is to create an economic ecosystem by reestablishing the market economic order so it will be fair and therefore revive energy in the Korean economy that leads to better lives including more better jobs.”

When asked whether tighter regulations on conglomerates undermine Moon’s promise of creating more jobs, he said creating a fair environment will help small and midsize companies expand. SMEs contribute larger number of jobs than conglomerates, Kim said. Kim said he will not immediately push for changes to the cross-shareholding governance structure as Korean conglomerates have been making huge changes since the global crisis of 2008.