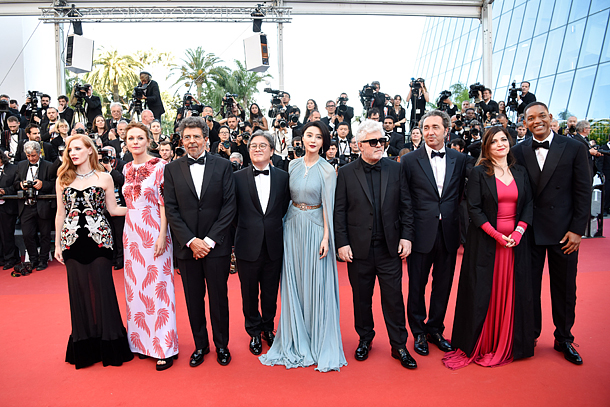 CANNES, France - The 70th Cannes Film Festival opened Wednesday under the lights of Cote D’Azur sunshine and high-wattage stars such as Will Smith and Marion Cotillard. But a brewing storm over Netflix’s place at the world’s most prestigious film festival clouded the event as Cannes rolled out the red carpet.

Optimism is high at this year’s Cannes, which features a lineup widely considered to be well-stocked with heavyweight filmmakers, including Todd Haynes (“Wonderstruck”), Sofia Coppola (“The Beguiled”), Michael Haneke (“Happy End”) and Lynne Ramsay (“You Were Never Really Here”). Rancor and controversy nonetheless dogged the festival’s preamble, as well as its opening day.

During the opening ceremony Wednesday, Iranian director Asghar Farhadi helped set a welcoming tone for the festival, calling it a “place where cultures speak to one another.” Farhadi’s presence in Cannes sharply contrasted with February’s Academy Awards ceremony, which the filmmaker (whose “The Salesman” won best foreign language film) boycotted to protest President Donald Trump’s proposed travel ban on visitors from several predominantly Muslim nations.

But while Cannes maintained its status as an international melting pot, definitions of what qualifies as cinema continued to stir debate. For the first time, Cannes selected two Netflix releases - Bong Joon-ho’s “Okja” and Noah Baumbach’s “The Meyerowitz Stories” - for its Palme d’Or competition.

French theaters, which have strict rules regarding streaming service films, rebelled at the thought of a movie that won’t play on the big screen winning the Palme d’Or - the biggest award in film next to an Oscar, and to some, even more important.

The festival relented and next year won’t accept streaming-only films in the competition.

Earlier Wednesday, Pedro Almodovar, who’s presiding over this year’s competition jury, read a lengthy statement in which he said, “I personally cannot conceive of not only the Palme d’Or, but any other prize, being given to a film and then being unable to see this film on a large screen.”

Coming from the head of the jury that will decide the award, the comment was striking and potentially means the Joon-ho and Baumbach films already are out of the running. But Almodovar, a Cannes regular, drew applause for his defense of the theatrical experience.

“The size of the screen should not be smaller than the chair you’re sitting in. It should not be part of your everyday setting,” the Spanish filmmaker said. “You must be small and humble in front of the image that’s here.”

Will Smith, a member of the jury that also includes Jessica Chastain, Paolo Sorrentino and Park Chan-wook, stuck up for Netflix. Later this year, Netflix will debut one of its biggest-budget films yet, the $90 million fantasy thriller “Bright,” in which Smith stars.

“In my house, Netflix has been nothing but an absolute benefit,” Smith said of his children’s viewing habits. “They get to see films they absolutely wouldn’t have seen. Netflix brings a great connectivity. There are movies that are not on a screen within 8,000 miles of them. They get to find those artists.”

Smith, who has not had a film play at Cannes before, was dressed dapperly and posing cheerfully with festival-goers screaming “Will! Will!”

“West Philadelphia is a long way from Cannes,” joked an enthusiastic Smith, referring to his hometown.

Security was greater than ever at the French festival, which has stepped up efforts to restrict access, added more metal detectors and even introduced an anti-drone system. France has been under a state of emergency since the November 2015 Paris attacks. This is also the first festival held since the truck attack in nearby Nice killed 86 people last June.

On Wednesday, the heightened measures were already causing something unthinkable at the stringently clockwork Cannes: slight delays at screenings and press conferences. Festival organizers have said everything was being done to maintain safety and the event’s celebratory atmosphere.

“You’re in a country which has got a lot of terrorist attacks. Charlie Hebdo, the Bataclan, Nice, one year ago. So we need to pay attention,” festival director Thierry Fremaux said in an interview.

Arnaud Desplechin’s “Ismael’s Ghosts,” with Mathieu Amalric, Charlotte Gainsbourg and Cotillard, was the opening-night film. Critics, while praising some of the performances, weren’t enamored with Desplechin’s farcical, self-referential drama about a filmmaker visited by a long missing ex-wife.

Ahead of the premiere of “Ismael’s Ghosts,” Monica Bellucci presided over an opening ceremony that included a slight riff on the best picture envelope flub that concluded this year’s Academy Awards ceremony.

In the Cannes version, a new envelope was brought out and the interaction dissolved into a dance that ended with a kiss from Bellucci.

The Cannes Film Festival runs through May 28, when the Palme d’Or winner and other awards will be announced.