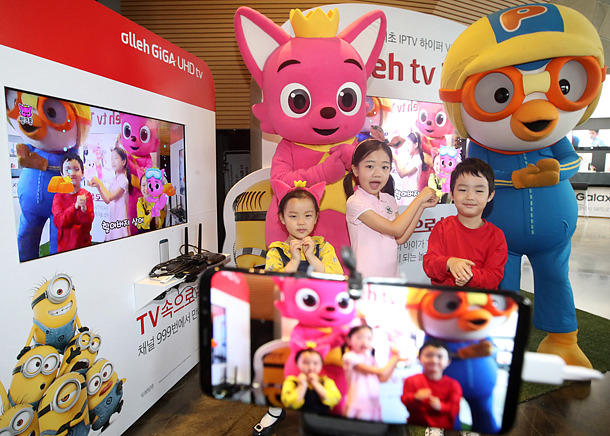 There’s an old children’s song in Korea that goes, “If I were on TV.”

KT, the country’s second-largest mobile carrier, is launching a TV service for children to make that dream come true.

“TV Ssok” puts users on TV screens when they connect their smartphones over WiFi networks to TVs that are subscribed to KT’s Olleh internet protocol TV service. KT’s IPTV has the largest number of subscribers in Korea.

The first is a miniature version of a Chroma Key studio, often called a green screen, which is used extensively in movies and TV weather forecasts. It allows children to change a solid background at home (like an empty wall in the living room or a bedroom) into an already prepared video featuring a moving character - such as another child who dances to the latest K-pop song. The users’ images are overlaid on the screen so they could see themselves dance with the character in the video.

The second type features popular animated characters such as Pororo, Pink Pong and Minions. A child can play with them within the same frame.

The third is called Magic Mirror and it creates mirrored images of the user in real time. KT has dubbed the patented technologies used for the real-time background effects “hyper virtual reality (VR).”

“Our service only requires a smartphone and IPTV to realize a range of effects, not the kind of expensive devices used at broadcasting stations,” said Yoo Hee-kwan, head of the media business division at KT, in a press conference on Thursday.

The carrier plans to introduce additional content by June.

The service will remain free through the end of this year and the company will start charging after evaluating users’ reactions.

Given the VR has a wide range of applicable areas, KT will expand it to education and sports for adult audience - golf lessons, for instance.

“We will come up with content that is worth paying for,” Yoo said.

The service, however, will be limited to Android smartphone users for the time being.

KT plans to release an iOS version by the end of this year.