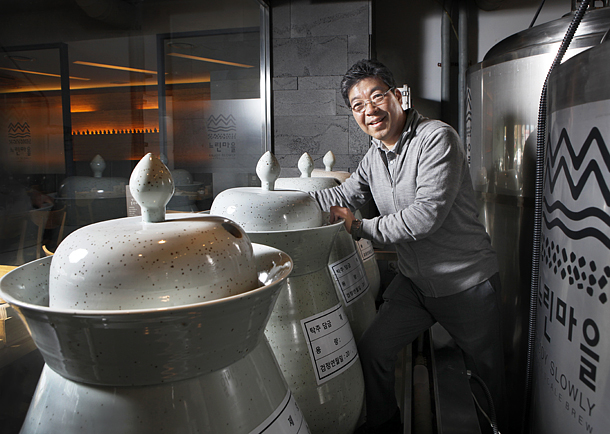 Bae Young-ho, founder and CEO of Baesangmyun Brewery, at the first branch of Slow City Brewery & Pub in Yangjae-dong, southern Seoul which is a makgeolli pub equipped with its microbrewery. [PARK SANG-MOON]

The founder of Korea’s leading traditional liquor manufacturer will share his knowledge and techniques on how to make and sell makgeolli, Korea’s traditional rice wine. His intent is to develop more makgeolli makers and expand the market size. But it means that he could be giving up the secrets of 30 years’ experience making and selling traditional liquor in Korea.

“I like to call it a democratization of manufacturing,” Bae, 58, said in a recent interview.

“We are opening up sources to share with others. Risks are there for sure. We could be leaking data and raising a potential rival. But the global paradigm is shifting to sharing information. It is more about establishing a platform and fostering peers,” he added.

Bae is a traditional liquor guru in Korea and the second son of Bae Sang-myun, a founder of Kooksoondang.

The Dongnaebangne Brewery Project, which launched last month, helps applicants acquire licenses to make and sell alcohol and learn the techniques of makgeolli brewing. The alcohol was named after the neighborhood where the brewer is located and will be sold to wholesalers, who will then distribute the liquor to nearby pubs, restaurants and supermarkets. What’s made in the neighborhood stays in the neighborhood, the company says. It is similar to how beer microbreweries operate.

“If sharing ideas on a common platform is something that only our company is thinking about, we would not survive with this system,” Bae said. “However this is the global paradigm. Korea’s liquor market needs a paradigm shift in order to take Korea’s traditional liquor to the next level,” he added.

So far, eight breweries have launched under the project and Bae plans to open 100 within the year. Bae thinks his latest project will give birth to the next-generation “star” makgeolli brand.

From left, Omaerak, a premium liquor made of plum; Slow City Makgeolli, a Korean traditional rice wine; the front and back of Sansachun, a Korean wine made of hawthorn berry and R4, a beer-tasting wine made of rice. They are some of the beverages produced by Baesangmyun Brewery. [BAESANGMYUN BREWERY]

Yet, it is not about conquering the market just by producing an excessive number of local breweries. The various flavors each brewery will create on its own are expected to create a more affluent makgeolli market.

“Makgeolli is a very delicate drink. It can generate so many different flavors even with the same machine, same recipe and same environment,” Bae says. “It is microorganism. Makgeolli has a different taste in all stages of its fermentation. Depending on the personality of the maker, it can taste differently too.”

Domestic manufacturers have been exporting bottled makgeolli and other traditional liquor to foreign countries including Japan and the United States, although the amount hasn’t been significant.

Baesangmyun Brewery’s goal is to export the brewery.

“The Dongnaebangnae Brewery Project is open to anybody, even those living abroad,” Bae says. “Just like foreign people are selling craft beer in Korea, we can do the same with makgeolli in foreign countries.”

He is looking forward to introducing the project in Paris, New York and even Nairobi in the next couple of years.

“Makgeolli sold there will be made with rice available there which will luckily have very different flavors from our own,” he said.

Bae also has a keen interest in how food is paired with traditional liquor.

One of the recipes that he thinks should be revived is the use of Korean traditional liquor as a condiment just like Westerners use wine in their food and the Japanese use sake.

“In my grandmother’s generation, using makgeolli or herbal liquor when cooking was a very common thing, but that culture diminished as time passed. Now we use clear alcohol like soju when cooking.”

He has been serving a number of dishes cooked with makgeolli at his Slow City Brewery & Pub.

How a course meal should be served is another vital factor.

“In formal meals, we follow the Western style by serving each dish separately in order. Before, each person had his or her own separate table filled with the entire course at once from appetizer to dessert. We followed a spatial arrangement such as putting the dessert in the far corner and placing the main foods like rice and meat front and center.”

The popularity of makgeolli reached its peak in the late 2000s and early 2010s when retailers and manufacturers started infusing a younger vibe to the beverage once overlooked as old and outdated. However, the boom quickly dwindled. Sales of makgeolli which reached 408,248 kiloliters (107.8 million gallons) in 2011, dropped to 345,256 kiloliters in 2015, according to Statistics Korea.

Bae says makgeolli and other traditional liquors should no longer be framed as “traditional drinks,” to overcome the slump. The term “traditional” shouldn’t be defined as a separate genre of a drink, he says.

“We have to make these traditional drinks into contemporary drinks. The word ‘traditional’ came about in Koreans’ effort to revive the genre which was once almost wiped out during the Colonial era.”

He emphasized that while Korea’s culinary culture has drastically changed in the past 60 years, the makgeolli recipe hasn’t changed as much.

“It should be updated. A lot of variation should be tried to become a contemporary drink while maintaining the culture and technique of the past,” he added.

Without a drastic paradigm shift, Bae says it would be hard to overcome the current not-so-favorable market for traditional liquor.

“I have worked in this business for the past 30 years, marketing Kooksoondang and Baekseju. It was a success but did it become the next Heineken? No. We need to change the paradigm. We need to converge with different industries and try out new things,” he says.

Although he’s devoted his entire life to the booze business, Bae isn’t much of a drinker. But he does have tips on enjoying diverse types of alcohol.

“Makgeolli is like rice. So don’t eat rice while drinking Makgeolli, but just eat banchan [Korean side dishes]. For herbal drinks, they bring out the appetite so drink them while eating. Soju is like drinking pure alcohol so eat a lot of vitamins by eating vegetables and nuts.”