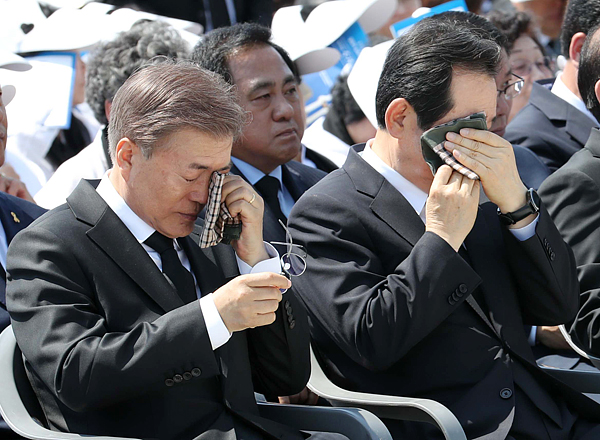 President Moon Jae-in sheds tears during the 37th anniversary commemoration of the May 18 Gwangju Democratization Movement held at the May 18 National Cemetery in Gwangju on Thursday. [YONHAP]

GWANGJU – In a clear sign that the liberals are back in power, a record number of people participated in an official ceremony commemorating the May 18 Gwangju Democratization Movement, which marked its 37th anniversary on Thursday.

Nearly 10,000 people, including victims’ families, politicians from across the ideological spectrum and liberal President Moon Jae-in came to the May 18 National Cemetery in Gwangju to honor the sacrifices and blood shed by the people of Gwangju 37 years ago calling for democracy and an end to the military government of Chun Doo Hwan, who rose to power through a military coup five months earlier.

The highlight of Thursday’s event was an emotional speech delivered by the newly elected president, speaking before hundreds of victims’ relatives dressed in white hanbok.

“It was the saddest moment in our modern history that unfolded on the streets of Gwangju 37 years ago,” said Moon of the Chun government’s bloody, 10-day crackdown on protestors in the streets of this southwestern city, 290 kilometers (180 miles) south of Seoul.

Touching on his own background as a human rights lawyer who fought against the Chun government in the 1980s in Busan, Moon said he felt a sense of indebtedness to those who had fallen to the brutal military forces in the streets of Gwangju.

“They were someone’s relatives and neighbors,” Moon said. “They were ordinary citizens and students. Nevertheless, they put their lives on the line to demand lives in which their human rights and freedoms were not to be infringed upon. As President, I bow my head deeply before the souls of the victims with gratitude.”

In the highly emotional speech, which moved many victims’ relatives to tears, Moon said his government would uphold the spirit of the May 18 uprising that, to some extent, has become an ideological battle point between liberals and conservatives. Some conservatives continue to believe that the 10-day protest was orchestrated by North Korea or its sympathizers.

Referring to that suspicion, Moon vowed to hold accountable people who distort or disparage the 1980 uprising.

“To this day, there are some in our society attempting to distort and disparage the Gwangju uprising. It cannot be tolerated,” said the president. “People should be proud of themselves for a democracy built on the blood and sacrifices of the many unknown in this country.”

Moon pledged to lay bare the truth behind the government massacre, including finding out who was responsible for giving an order to fire at unarmed civilians on the Gwangju streets, which led to a mass civil revolt and the military takeover of the city.

Moon emphasized that his government inherited the spirit of the uprising, saying, “The Moon Jae-in government is an extension of the Gwangju Democratic Movement.”

For many victims’ relatives, Moon’s speech came as solace, testimony that their loved ones’ sacrifices were not in vain.

“I was overwhelmed with gratitude as I listened to President Moon. It was the most moving speech I’ve ever heard at any May 18 ceremony,” said Im Geum-dam, 86, who lost her 29-year old son, Kim Gyeong-chul, in the crackdown. Kim was a prime example of the indiscriminate killing. He was not a protester but was killed by the military after he arrived at the Gwangju Express Bus Terminal from Daejeon to celebrate his daughter’s 100th-day celebration.

Kim’s death is registered as the first official casualty of the May 18 Democratization Movement, according to the May 18 Memorial Foundation. “I only wish now my son’s sacrifice will not be in vain,” said Im with tears in her eyes before her son’s gravestone.

The May 18 Gwangju Democratization Movement is the official term for the 10-day civilian uprising against the Chun Doo Hwan leadership from May 18, 1980, when students from Chonnam National University staged a protest calling for democracy. The following day, the Chun leadership dispatched special forces soldiers to Gwangju, who opened fire on protesters and deployed brutal tactics such as beatings to crush the demonstration. In response, the protestors broke into police stations and acquired weapons and took control of the city by seizing the South Jeolla provincial headquarters.

The protestors’ control of the city, however, didn’t last long. The Chun government dispatched military forces in the wee hours of May 27, sending tanks, helicopters and special forces soldiers to re-take control of the city. It only took two hours for the military to complete its mission. According to the May 18 Memorial Foundation, 154 were killed during the 10-day uprising or after from injuries sustained. 70 people are recognized as missing, probably buried in anonymous graves.

Even aside from Moon’s heartfelt speech, this year’s commemoration could not have been more different from ceremonies arranged by the two previous conservative governments. In the nine years of conservative rule, former presidents Lee Myung-bak and Park Geun-hye attended the ceremony only once, each in their first year in office. For the other years, they sent cabinet members to read an address. In contrast, former liberal President Roh Moo-hyun, for whom Moon was chief of staff, attended the event every year during his five-year term.

For this year’s commemoration, the Moon government gave an order to play the symbolic song “March for the Beloved” and have it sung in chorus by standing ceremony participants. Whether or not to require ceremony participants to stand and sing the song in chorus – like the national anthem at government-sponsored ceremonies – had been a controversial issue since 2009, when former President Lee dropped the requirement. He directed the song be sung by a chorus, not by participants in the memorial.

Individuals were all allowed to stand and sing the song if they wished to. Victims’ relatives and liberals in general viewed that decision as an attempt to water down the memorial and minimize the May 18 Democratization Movement as a whole.

“March for the Beloved” was written in 1982 for a posthumous wedding ceremony of two protestors who were killed in the uprising. The song became a symbol of the struggle against the military government in the 1980s.

Some conservatives say the song has links to North Korea, because it was used as background music in a 1991 North Korean film. Victims’ relatives believe that’s a mere excuse to dishonor the Gwangju uprising.

Just three days into his presidency, Moon ordered the veterans ministry to reverse its previous position on the song so it could be sung in chorus by all participants in the memorial. Also, Moon accepted the resignation of Park Sung-choon, who had refused to elevate the song’s status during the ceremony over the years. Moon appointed Pee Woo-jin, a retired Army Lt. Colonel, who was Korea’s second woman helicopter pilot.

Pee’s appointment is seen as a crack in Korea’s glass ceiling. When asked whether she would sing the symbolic song during a press briefing on Wednesday, the former pilot said she would happily sing it just as she would the national anthem. Her predecessor Park refused to sing it for years.