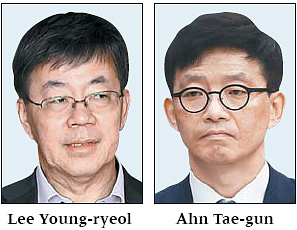 The Ministry of Justice and the prosecution launched a massive joint inspection on Thursday into a dinner hosted by a ministry director and a senior prosecutor, during which they gave envelopes stuffed with cash to each others’ juniors.

The inspection was to follow through with an order by President Moon Jae-in after reports came in about a dinner last month involving Lee Young-ryeol, head of the Seoul Central District Prosecutors’ Office, and Ahn Tae-gun, director of the Criminal Affairs Bureau of the Ministry of Justice.

After Moon ordered an inspection on Wednesday, the ministry and the prosecution quickly formed a 22-member team headed by the inspector of the ministry. Seven prosecutors will soon join the inspection.

According to the Blue House, Lee and Ahn submitted their resignations on Thursday morning. The president, however, did not accept them as of Thursday evening. “The president did not give any specific response after he was briefed about the resignations,” presidential spokesman Park Soo-hyun said.

A senior Blue House official said resignations are not processed during an ongoing inspection, indicating that they will go through the scrutiny while keeping their current titles.

Lee and Ahn, accompanied by their juniors, had a dinner on April 21. Ahn gave the prosecutors envelops of cash, each containing 700,000 won [$625] to 1 million won, and Lee gave 1 million won each to two officials of Ahn’s bureau. The ministry officials returned the money the next day to the Seoul Central District Prosecutors’ Office.

Suspicions were raised about the dinner, as the seven prosecutors accompanying Lee were from the special investigation team, which probed the abuse of power and corruption scandal of former President Park Geun-hye and her associates.

During the probe, the prosecutors did not look into an alleged connections between Ahn and Woo Byung-woo, former civil affairs senior secretary of the Park Blue House. An independent counsel investigation had revealed that more than 1,000 phone calls between Ahn and Woo took place from July to October, when Woo was the target of a corruption probe, but the prosecution did not follow through with the suspicion.

The joint inspection team will look into the sources of Lee and Ahn’s money and their reasons. It will also look into whether the gifts were in violation of the newly introduced anti-graft law. A general review will also be conducted on the uses of the special expense accounts of the ministry and the prosecution.

The inspection plan was reported to the office of the senior civil affairs secretary, the Blue House said.

Although Moon, who took office last week, expressed his determination to overhaul the prosecution, the Blue House tried to dissociate the presidential order for the inspection and the prosecutorial reform, perhaps to minimize strong resistance from one of the most powerful institutions in the country.

Any attempts at prosecutorial reform, particularly those pushed by liberal President Roh Moo-hyun in 2003, have had little progress in the past.

“The president’s order was to look into the matter in terms of the discipline and integrity of the public servants,” Park said Thursday. “For it to be prosecutorial reform, a new minister and vice minister of justice should be appointed. But right now, we have no means to overhaul the prosecution, so it is inappropriate to call it an attempt at prosecutorial reform.”

The ministry has no minister since Kim Hyun-woong stepped down last year in the aftermath of the Park scandal. The prosecution also has no leader, because Prosecutor General Kim Soo-nam stepped down shortly after Moon took office. A senior presidential aide told the JoongAng Ilbo Moon hopes to reform the prosecution. “The starting point is clearly an inspection of the public servants’ integrity,” he said. “We cannot jump to any conclusions because the inspection has yet to begin, but this is an issue that will be linked to the legitimacy of prosecutorial reform.” Liberal politicians on Thursday supported Moon’s campaign. “After a major investigation, it’s customary for a senior prosecutor to give money gifts to the team,” Rep. Back Hye-ryun of the Democratic Party, a former prosecutor, said in a radio interview. “But it is unheard-of that the Justice Ministry gives money to investigators.”