Special envoy proposes to make up with Japan

Special envoy proposes to make up with Japan 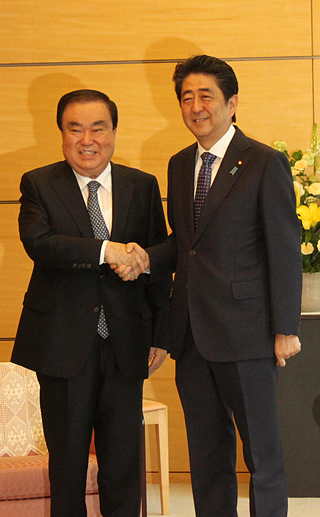 President Moon Jae-in conveyed his desire to revive the “shuttle diplomacy” of the Roh Moo-hyun administration with Japan through a special envoy who met with Japanese Prime Minister Shinzo Abe on Thursday.

Democratic Party Rep. Moon Hee-sang, the president’s special envoy to Japan, delivered a two-page letter from the new Korean leader to Abe during a meeting in Tokyo.

The shuttle diplomacy stopped in 2011 when bilateral ties between Korea and Japan deteriorated during the Lee Myung-bak administration over historical and territorial issues.

Abe added, “Korea is our most important country that shares strategic interests,” adding he plans to build future-oriented relations with President Moon.

The prime minister also called for Korea’s faithful implementation of the 2015 bilateral agreement to resolve the issue of Japan’s wartime sexual slavery, as it “is an agreement between the two countries.”

He said the two countries have built up friendly relations in many areas, but that there are also many problems between Korea and Japan.

Moon said during his presidential campaign that the December 2015 settlement to resolve the issue of Japan’s wartime sexual slavery should be renegotiated to the satisfaction of the surviving victims.

The deal to resolve the so-called comfort women issue consisted of the Japanese prime minister’s apology and a 1 billion yen ($8.98 million) fund for the victims. It has been scorned by some of the victims as well as civic activists who wanted Tokyo to take clear legal responsibility for the human rights abuses.

Rep. Moon responded, “The reality is that the sentiment of many Korean people is that they cannot accept the comfort women deal,” the same message he conveyed to Japanese Foreign Minister Fumio Kishida in talks the previous day.

President Moon conveyed a similar message to Abe in their first phone call on May 11.

The prime minister also questioned President Moon’s remarks that he would visit North Korea before the U.S. or Japan and reopen the inter-Korean Kaesong Industrial Complex, which has been shut since February 2016 to deprive Pyongyang of revenues from it.

The envoy replied that such remarks were a part of a process of resolving the North Korean nuclear issue.

Abe went on to say he would like to speak with Moon in person.

He added that Moon dispatching a special envoy to Japan right after his inauguration “is an indication of the importance he puts on Korea-Japan relations.”

Rep. Moon told reporters after the talks that the meeting with the prime minister was held in “an amicable and sincere atmosphere and honest discussions were held.”

He added he explained to Abe the significance of the inauguration of the new administration and also its direction, and that the two spent some time dwelling on the North Korea nuclear issue, a common point of interest.

The two countries are reviewing holding a summit between President Moon and Abe on the sidelines of an upcoming G-20 summit in Hamburg in July.