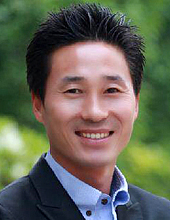 A DNA analysis of a bone fragment retrieved from the Sewol wreckage in early May was found on Wednesday to be the remains of Ko Chang-suk, the former Danwon High School teacher who was said to have given up his life jacket for the sake of a student and told students “wear life jackets and escape from the ship” when the ferry was sinking on April 16, 2014.

Ko is one of the eight remaining unrecovered victims of the 304 who lost their lives in the Sewol Ferry tragedy three years ago. The remains of Cho Eun-hwa, a 16-year-old student, were discovered last month.

“It’s difficult to put into words ? whether to feel happy or sad,” said Ko’s 38-year-old widow. But she turned down a request for an interview, saying, “Not all my husband’s remains have been recovered and there are those who have not recovered any.”

Min added, “If you write an article, I would appreciate if you could speak of the teacher Ko Chang-suk. This past Teacher’s Day was a very painful day.”

When the tragedy occurred, Ko had only been hired as a physical education teacher for a month. He had a knack for sports and was a lifeguard in his university days, yet he refused to flee when the waters overcame the boat. On the morning of the Sewol tragedy, Ko left a final text message, “I was having a tough time taking care of the kids. I’m sorry.” Students say he was last seen in the fourth floor rooms yelling, “Get out of the ship!”

One surviving student said, “The first person to instruct us to put on life jackets wasn’t the captain, but the teacher.”

Ko was well-known as a doting and affectionate husband who would hop the fence dividing the high school where he worked and his wife’s workplace, Danwon Middle School, to present his wife with treats. For her birthdays and their wedding anniversaries, he would dazzle her with flowers. “He would meet students’ eyes and, though he was a disciplinary instructor, he had many followers,” said Kim Deok-yeong, Ko’s former co-worker at the school.

“He had a good character. He wasn’t hired but a month, yet he would call his fellow teachers close brothers.”

The bone fragment was first discovered on May 5, when divers found it in the seabed where the sunken wreckage of the Sewol had been.

DNA analysis performed by the National Forensics Service (NFS) took 12 days, less than the anticipated month. As hard portions of the bone caused difficulty, it was made soft for samples to be extracted for analysis through a process called decalcification, which by itself normally requires two to three weeks.

“We shortened the duration for a speedy analysis by proceeding to extract a sample from the portion of the bone that underwent decalcification first,” said Lee Yang-han, an official at the NFS. “The condition of the pertinent area of bone was satisfactory and identity confirmation was made possible.”

After the discovery of two bone fragments on the fourth floor of the steerage on May 10, remains have been continuously discovered for the last eight days on the third and fourth floors of the wreck.

“Time is necessary as cranial bones and teeth must go through the process of decalcification for accurate DNA analysis,” Lee said. “The duration of analysis can be moved up if the condition of the discovered bones is favorable.”